Leah on her summer organizing internship

Hey everyone! My name is Leah, and I have been interning at DJJ this summer. It’s about time for me to write this blog post to introduce myself and say goodbye as well.

While I grew up in Chevy Chase, Maryland, home for me consists of multiple places. Detroit is a special place for me because both of my parents are from here. During the school year, I live in Middletown, Connecticut, where I attend Wesleyan University. I am a rising junior majoring in the College of Social Studies (a mix of economics, government, philosophy, and history) and environmental studies. I also do student/labor organizing, food justice work, and organizing for the justice and security of Palestinians. 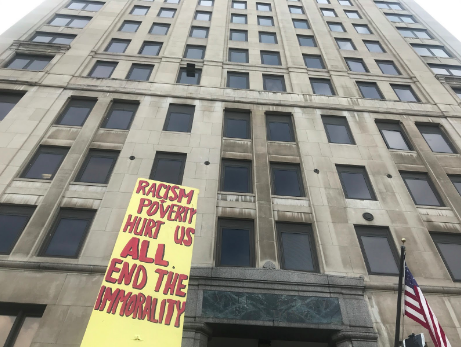 Before my time at DJJ, I had some experience in community organizing and social justice work, but I had minimal experience in interfaith organizing. After attending meetings such as the People’s Water Board Faith Action Committee, I now see that interfaith organizing is a powerful way to bring a diverse group of people together. Another major lesson I have learned from DJJ is the translation of a community’s values, such as Jewish values, into organizing.

At Right: The Poor People's Campaign Detroit action outside the Detroit Water and Sewage Department. Photo by Leah.

On my very first day at DJJ, I jumped right into the Poor People’s Campaign demonstration in Lansing. A few days later, I even got to hear Reverend William Barber speak in front of Cobo Hall! The next week, I was in Detroit for another PPC action. Needless to say, my first days at DJJ were anything but ordinary! 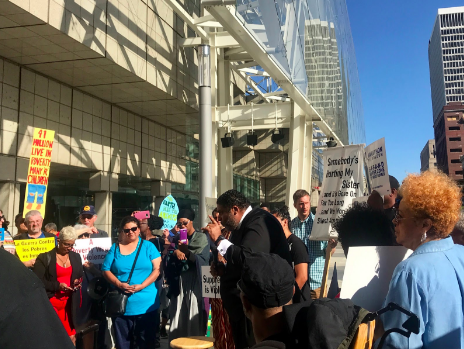 At Right: Rev. Barber speaking at a Poor People's Campaign press conference at Cobo Hall in June. Photo by Leah.

Another highlight of my work at DJJ was getting involved with the Coalition to End Unconstitutional Tax Foreclosures. I quickly learned tons about the Michigan Constitution’s language regarding property tax assessments. (I highly recommend Prof. Bernadette Atuahene’s "Stategraft" as a resource for those interested in the Coalition’s work.) It was incredible to get out into the neighborhoods that are affected by blight and abandonment, and to feel the resilience of many Detroiters.

Later, I had the chance to attend multiple People’s Water Board Coalition meetings, support the Motor City Freedom Riders’ efforts to get a dual-county transit measure on the November ballot, and research how recent investment in downtown development is intertwined with economic and racial injustice.

One of my favorite things about DJJ is the incredible team I have gotten to work with. I have loved spending my summer days with them, despite the heat (and the short lifespans of multiple air conditioners). I have never worked in an office where there is so much love and appreciation for one another.

Thank you DJJ, and I hope to see you again soon! 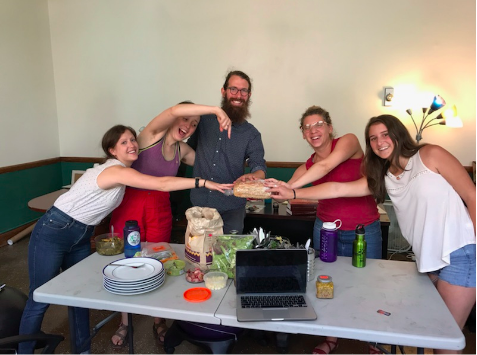 Bobbi Spiegler commented on Leah on her summer organizing internship 2018-07-25 17:17:45 -0400
It has been a pleasure getting to know you Leah. Yes, you did jump right in with your feet on the ground. I have appreciated your wisdom and insight. You are a young activist but an “old soul”, truly inspirational.
It is DJJ that is grateful these last several weeks. Hope to see you on your visits to Detroit.
Best on your new journey.
Bobbi