This Giving Tuesday, Detroit Jews for Justice is launching our End of Year Grassroots Fundraising Campaign, and I am asking you all to donate to support our work.

I’m a volunteer leader at DJJ, and a new one at that – if you had told me I would be sending out a grassroots fundraising email for DJJ a year ago, I would have been…confused. But winning feels really good, and so here I am putting myself out there to people I’ve never met asking for money.

As soon as I got involved, DJJ offered me a space to put the Jewish values I was brought up with into practice. I collected signatures to put Reproductive Freedom For All (Proposal 3) on the ballot, organized pop-up tables to distribute informational literature, and got voters to the polls. Those experiences inspired me to get involved in other local political work — I called on the Berkley School Board to adopt a gun safety resolution and served as an election challenger for the midterms—because no one group or strategy is leading our movement; we can only succeed in coalition and partnership. 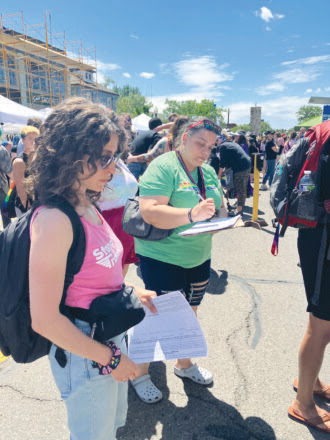 And we did win! Proposal 3 passed, and was a catalyst for progressive victories throughout the state. Now that progressive majorities control state government for the first time in generations, there is so much more we and our partners can accomplish. DJJ’s time is now.

DJJ also models the kind of Jewish community I want for myself and for my children—one that is intergenerational, queer, and easy to plug into, filled with Jews eager to put thought and sentiment into community advocacy and action. And it goes both ways—my work with DJJ inspired me to start talking with my children about bodily autonomy and income inequality.

In this political moment in Detroit, real change is being made in multiracial coalition spaces, following the lead of the Black liberation struggle. It is vital that Jews are represented in those coalitions, both for our Jewish communities and for our movements. But we can only do that with your support.

By January 1, we need to raise $25,000 to sustain our small, gritty, but mighty organization. Will you help us reach our goal by making a one-time donation or a recurring monthly donation? Donate to DJJ.