On July 23, 2018, Michael Duggan, Mayor of Detroit, held a meeting for the constituents of District 5.  These events are held from time to time in the various City Council Districts, and they give the Mayor a chance to reach out to his constituents, promote his accomplishments, and hear from the people about what kind of job the city government is doing, or failing to do, from their point of view.

The meeting was well attended (there was some debate about how many were there, with the guesses ranging from 200 to 500). In the audience was also a fairly large complement of city employees, and if the speakers had a specific complaint the Mayor would often call out one of them to take that person’s contact information and follow up to resolve their complaint.  It was a good show of “public service,”  though received with occasional mixed results.
There were a number of folks from the DJJ Water Team in attendance, with the aim of raising the issue of water shut-offs and the need to adopt a workable water affordability plan.  Because these meetings are open ended, with people raising whatever issues are impinging on them at the moment, it is generally hard to bring a focus to any one particular issue.  Nevertheless, Rabbi Alana and Barbara Harvey, the two DJJers who were able to speak, did an excellent job of focusing on the systematic nature of the water shut-off problem and challenging the Mayor to directly address it.  He failed to meet their challenge. Nevertheless, the impact of the water issue at this meeting was modest. The DJJ Water Team will need to learn how best to prepare for maximum impact at these meetings so that the audience clearly sees the importance of the issue, even if the Mayor does not.  That is among our challenges going forward.
You can watch and read Rabbi Alana's fierce remarks at the District 5 meeting here. Reach out to Director of Organizing, Eleanor, to get involved in DJJ's water justice work: [email protected] 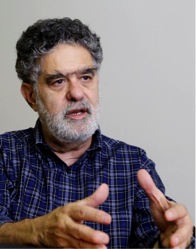 Michael Friedman is an active DJJ leader and member of the water campaign team. He retired at the end of 2013 from the law firm of Honigman Miller Schwartz and Cohn, LLP. He is a certified mediator, and handles pro bono court ordered mediations through the Wayne County Mediation Center. He has been Board Chair of Center for Community-Based Enterprise since its founding in 2007, and has done volunteer staff work for C2BE since his retirement. He is also currently Board Secretary of the Coalition On Temporary Shelter (COTS) in Detroit, and a Board member and past Board President of the Friends of the Detroit Public Library Foundation. Prior to becoming an attorney, Michael drove a truck in Cleveland, Ohio for 14 years, and was a union activist, being a founding member of Teamsters for a Democratic Union (TDU).