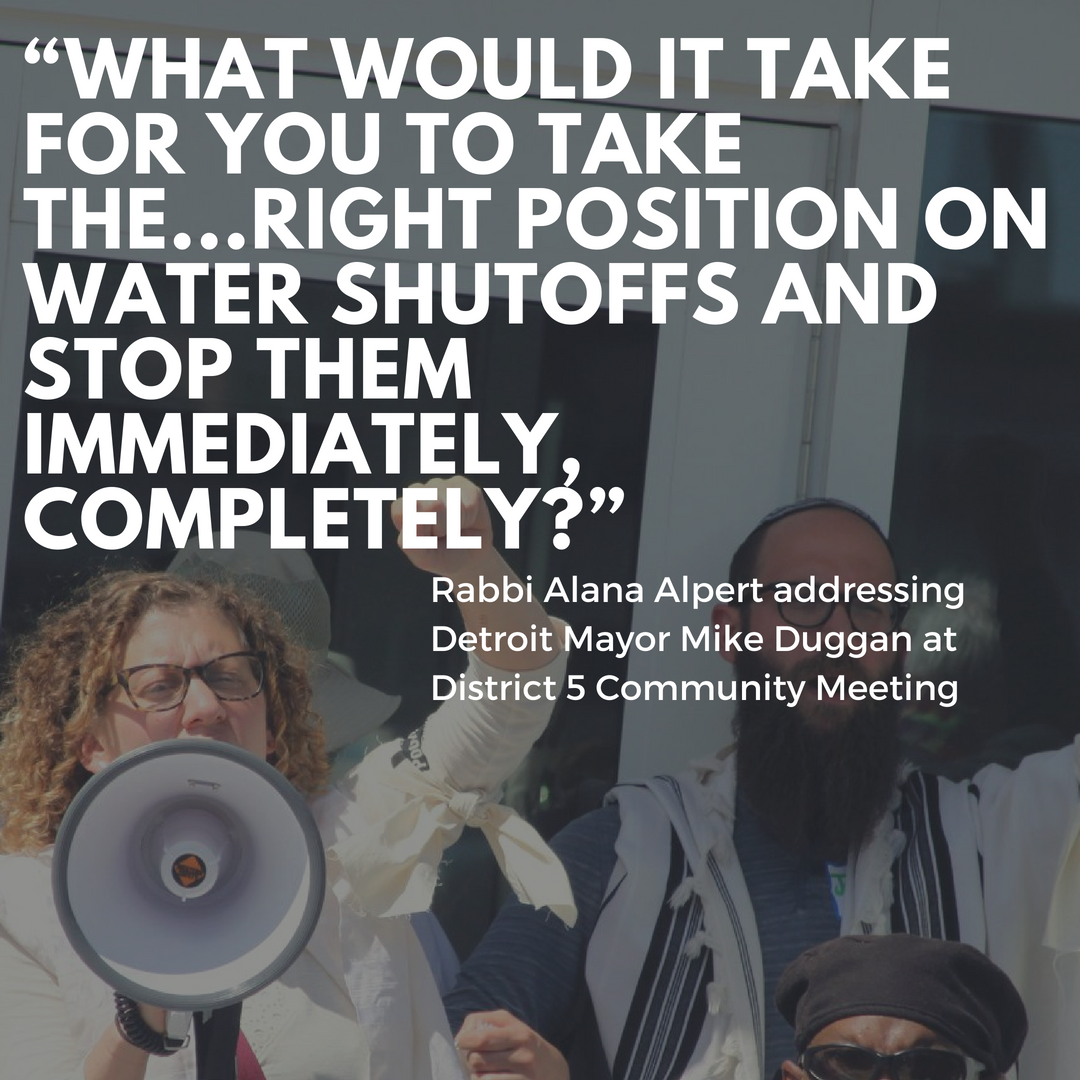 Our partners in the social justice community have been calling for escalation around a number of injustices. At the encouragement of the People's Water Board, Rabbi Alana, a resident of District 5, asked Mayor Duggan about water shutoffs, foreclosures, and his condescension of other residents who had pressed him about related structural problems earlier that night. Her question moved the whole room to shouts of support as she walked away from the microphone. Watch the whole video below (captions overlay the video and a transcript can be found below the video).

Hi I’m Rabbi Alana Alpert. I am a homeowner in the North End, and I moved to Detroit so that myself and the new Detroiter in my belly could be surrounded by the dedicated and resilient people who have lived here for the last many decades.

[Rabbi Alana] Many of whom are in this room. And I feel really really blessed, which is why I’m confused why it seems you’re promoting policies which are pushing out the long time Detroiters, like foreclosures and water shut offs. Because instead of being surrounded by these resilient Detroiters, like Dr. Paul said, I’m being surrounded by water-borne illnesses. And I’ve heard you tonight be really helpful to people who have real problems that are very simple and straightforward and you made a really wonderful show of “oh let’s solve this problem, let’s solve that problem,” but every time someone raised a problem about a structural issue, a systematic issue, an issue around racism and economic justice, you have condescended those residents and not taken any responsibility or offered any solutions. So my question is: “What would it take for you to not take the popular position on water shut offs but the right position on water shut offs and stop them immediately, completely?”

[Mayor Duggan] “To say that I am pushing people out... the five years before I was elected 20,000 people a year left the city. 100,000 people left the city in 5 years, everything that I have done has been designed to keep people here. Better ambulance response times, with street lights. We lost 20,000 people last year. We’ve cut the number of water shut offs by 90 percent, we’ve cut foreclosures by 90 percent. I believe we are acting responsibly I also believe if I were to say today we’re not going to do water shut offs that all the people in this room who are paying their water bills, many of whom are strained to pay by themselves,  do not want to pay $300 a year.

[Rabbi Alana interjects] Do we want the water shut offs to stop?