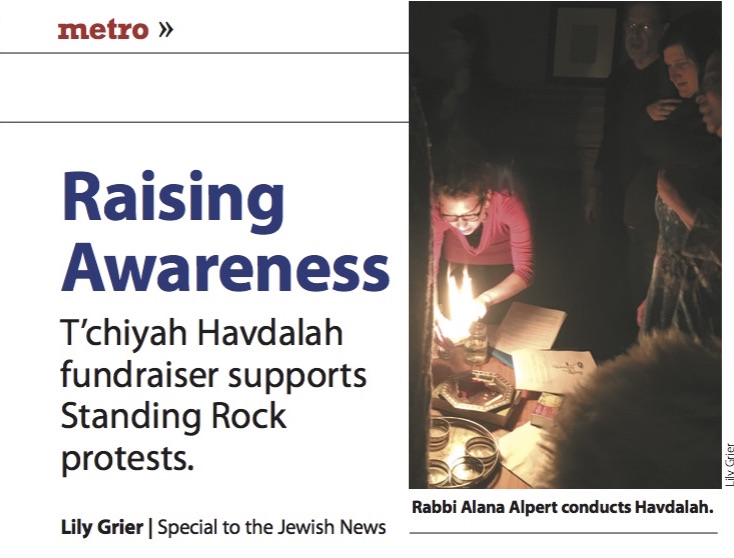 On Saturday, Nov. 26, more than 50 individuals gathered in Detroit at the home of Rabbi Alana Alpert for an unconventional Havdalah experience. Though T’chiyah, a Reconstructionist congregation, hosts monthly Havdalah gatherings, this was the first that served as a fundraiser. All attendees were encouraged to donate whatever they could to the Standing Rock Sioux tribe.

The Dakota Access Pipeline, con- structed by Energy Transfer Partners, is designed to transport crude oil from North Dakota to Illinois through South Dakota and Iowa. If completed as planned, the 1,172-mile pipeline could contaminate the Standing Rock Sioux Tribe’s water source and would cut through sacred burial grounds. Calling themselves “the water protectors,” protestors from the Standing Rock Sioux tribe and allies have camped out at the pipeline for the past seven months.

The local T’chiyah event began with a Maariv service that incorporated a new prayer titled “Hashkiveinu for Standing Rock.” The traditional Hashkiveinu asks God to protect us as we lie down to sleep. In the adapted version, God is asked to “awaken us to another day of action, solidarity and support” and to protect “those who gather prayerfully, peacefully, unarmed.”

The prayer asks not for the destruction of those inflicting violence and obstructing peace, but rather that they may find guidance and renewed connection to the living Earth. Before Havdalah, Alpert’s father, Gregg Alpert, spoke about the impor- tance of willingness to engage people in uncomfortable conversations. After hearing the flame sizzle into the grape juice and setting an intention to go into the week with newfound strength, attendees helped themselves to dinner and dispersed around the house to begin those uncomfortable, challenging conversations. Alpert believed it was imperative to raise consciousness around Standing Rock, as she says Native Americans have been systematically disenfranchised, stripped of rights and humanity throughout our country’s history, often marginalized even by social justice-oriented communities.

“The brit [covenant] is a commitment to being awake and aware of what’s happening around us,” she said. “This alliance is important not only because of Jewish environmental values, but also because of a responsibility to lift up voices that have been so often silenced." Alpert saw Havdalah as an appropriate forum for consciousness-raising, as the ritual represents an awakening, an inten- tional re-emergence into the world as Shabbat ends and the new week begins. She believes Judaism and broader social activism are mutually reinforcing.

“Judaism operates as a natural system for bringing folks together through ritual,” she said. “People must also come together to engage in social action.” Alpert’s family redirected the resources they would have spent on a traditional Thanksgiving dinner toward this communal meal.

Hayley Sakwa, a 24-year-old Detroiter, said, “I wanted my holiday to be rooted in justice for all people, in solidarity with all people,” she said. “I felt like I couldn’t do Thanksgiving this year without paying attention to and supporting our allies at Standing Rock.”

Alpert hopes this event was a beginning for attendees, rather than an end. The event provided attendees with a space to develop an emotional relationship to Standing Rock through Jewish ritual. “This emotional work is necessary so people can prepare to hear, to learn, to take risks and make sacrifices,” she said. On Dec. 5, the Army Corps of Engineers said it would look for an alter- native route for the final section of the project, giving the Sioux a fragile victory.