Thank you for joining Detroit Jews for Justice at the 2021 Myra Wolfgang Awards on the evening of Tuesday, May 4th at 7:30pm ET.

This virtual gala is hosted by DJJ Leader Zak Rosen.

Zak is creator of The Best Advice Show Podcast. The Best Advice Show is your daily reminder that there are weird, delightful and effective ways to survive and thrive in this world. In every (very short) episode of the show, a different contributor offers their own personal take on what they do to make their life better, healthier, saner and more livable and it’s likely gonna be something you can try today, if you want!

Zak is the Director of Podcasts at Graham Media Group and editor of WDIV/Graham’s award-winning narrative podcast, Shattered. He’s also the producer/editor of How to Survive the End of the World and the creator of Pregnant Pause with Zak and Shira, which chronicles his and his wife’s decision to bring a child into this strange world of ours.

Chace Morris performs an original poem "You're Coming With Me"

The TETRA is the creative partnership of Detroit artists Sherina Rodriguez Sharpe & Chace Morris. Combining art, performance and Black spiritual technologies, The TETRA is creating a Digital Underground Railroad: a six-year journey full of digital and in-person rituals that decolonize the mind, heal inter-generational trauma and activate the imagination around new concepts of Freedom.

Freedom, as defined by The TETRA, is a life you no longer have to escape from. Sharpe & Morris’ work is designed to disrupt the expected and erode the divide between audience / performer, reality / impossible, survival / thrival.

When not performing, The TETRA is relentlessly correcting the word “soda” to “pop” & quietly judging your pound cake.

To learn more about The TETRA, stay updated & receive their daily rituals sign up for the TETRA email list here.

Tristan Taylor is a bisexual, working-class Black man born and raised in Detroit. He became a revolutionary as the result of growing up in a family that had to struggle (and still is) hard to survive. A social justice activist at 17, Tristan was won to Trotskyism at 18 because it embodied a Marxist method that helped explain the inequality and oppressed he faced and how to fight it. He has been involved in struggles that range from defending affirmative action, opposing privatization efforts of public school systems, for immigrant rights, challenging gentrification, and fighting against police brutality. He is one of the co-founders of Detroit Will Breathe (DWB), an organization born in the midst of the struggle for Black and Brown lives that seek to build a militant, integrated, and youth-led movement in Detroit that has been able to play a leading and radical role in the struggle for Black and Brown lives. He is also a recent member of Left Voice, a revolutionary independent news publication that seeks to tell the stories of the working-class and oppressed communities fighting for justice and liberation.

Julie Hurwitz, of Detroit, Michigan, is a partner in the firm of Goodman Hurwitz & James, P.C., where she specializes in civil rights and government misconduct litigation. She is the founding Executive Director of the Sugar Law Center for Economic and Social Justice [Sugar Law Center] in Detroit, from 1990-1993 and 1998-2006. She is currently Vice President of the Michigan/Detroit Chapter of the National Lawyers Guild and is on the Boards of Directors of the Sugar Law Center, and the Michigan Coalition for Human Rights. She has successfully tried several civil rights cases to verdict, including police misconduct, prisoner rights, malicious prosecution, wrongful conviction, failure to protect and sexual harassment cases. She has represented political activists who engage in civil disobedience since the early 1980’s, including several members of DJJ more recently.

Julie Hurwitz is recognized as a 2021 Myra Wolfgang Honoree for her work representing victims of the Flint MI water crisis and Detroit Black Lives Matter organization, Detroit Will Breathe.

Tova Perlmutter, independent consultant, has 30 years of experience helping progressive initiatives obtain and use resources to advance social change. In 2020, she managed a get-out-the-vote campaign for Detroit Disability Power that reached over a quarter of a million voters in Southeast Michigan. Before that, she was part of the leadership team at nonprofit media outlet Mondoweiss.net. From 2006-2012, she was Executive Director of Detroit's Sugar Law Center for Economic and Social Justice, a national nonprofit dedicated to advancing the rights of working people and their communities.

As a consultant, Tova has helped many other organizations become more stable and strategic. A Harvard graduate, Tova earned master’s degrees at Johns Hopkins University and the University of Michigan, and conducted doctoral research on ethnic and racial politics in American cities. She has also completed specialized programs on multicultural leadership and project management.

DDP is recognized as a 2021 Myra Wolfgang Honoree for their work during the Covid-19 pandemic to ensure access to care, testing and vaccines for the disability community in Detroit and across the state of Michigan.

Ian Finkelstein [aka Ian Fink] is a Detroit-based jazz pianist, producer and composer. He has performed with artists such as Marcus Belgrave, Robert Hurst, Esperanza Spalding, Terri Lyne Carrington, Karriem Riggins, and tours regularly with the Shigeto Live Ensemble. He has recorded for artists including Black Milk, Omar-S, Scott Grooves, Waajeed, Shigeto, Andrés, and others. Finkelstein is an alumni of the University of Michigan School of Music, Theater and Dance. In 2018, he was named a Geri Allen Fellow and was a member of the Gathering Orchestra, hosted by the Carr Center. He is the recipient of a 2020 Gilda Award, awarded by Kresge Arts in Detroit, a program of The Kresge Foundation.

To further enjoy Ian's music visit his bandcamp at ianfink.bandcamp.com or follow him on Instagram at @finkianfink.

Cary has specialized in employment and civil rights litigation for 25 years, since graduating magna cum laude from the Detroit College of Law in 1989. She has successfully litigated and tried numerous civil rights cases resulting in favorable settlements and verdicts for her clients in the state and federal courts, including discrimination cases based on age, national origin, sex, race and disability, cases alleging retaliation and sexual, racial and national origin harassment, violations of the Family and Medical Leave Act and Whistle Blowers Protection Act, and prisoner rights cases. Cary is also a member of the Flint Water Class Action Litigation team which is currently litigating multiple class action lawsuits in federal and state court.

Cary was selected a 2016 “Lawyer of the Year” by Best Lawyers in America; has received the highest rating possible, AV, from Martindale-Hubbell’s peer review national Legal Directory; and, since 2006 has been rated as one of the top employment lawyers in Michigan in Michigan Super Lawyer. In relation to her work as one of the trial attorneys in Neal v. Michigan Department of Corrections- a class action lawsuit filed on behalf of over 500 female prisoners in Michigan who had been sexually assaulted by male prison guards- she was awarded: The prestigious national award of Trial Lawyer of the Year by the Public Justice Foundation (2008) in honor of her outstanding contribution to the public interest; the Lawyers for the People Award by the National Lawyers Guild (2008) in recognition of extraordinary commitment to uphold human, civil, and constitutional rights, and; the Wade Hampton McCree Jr. Award (2009) for the advancement of social justice awarded by the Federal Bar Association.

Rudy (Ruthven) Simons was a vice president of the Cranbrook Peace Foundation, a former co-chair and longtime board member of the MI Coalition for Human Rights, deeply involved with the Center for Peace and Conflict Studies at Wayne State University for decades, and a member of over 20 delegations to foreign countries. He has rallied for causes such as opposition to the Vietnam War, anti-South African apartheid, ending U.S. intervention in Central America, Haiti, Iraq, and Iran, human rights and civil rights.

Rudy Simons is recognized as a 2021 Myra Wolfgang Honoree for his life long impact to enable peace and human rights in Detroit and the world.

Give a sustaining gift to Detroit Jews for Justice

Become a monthly donor to Detroit Jews for Justice 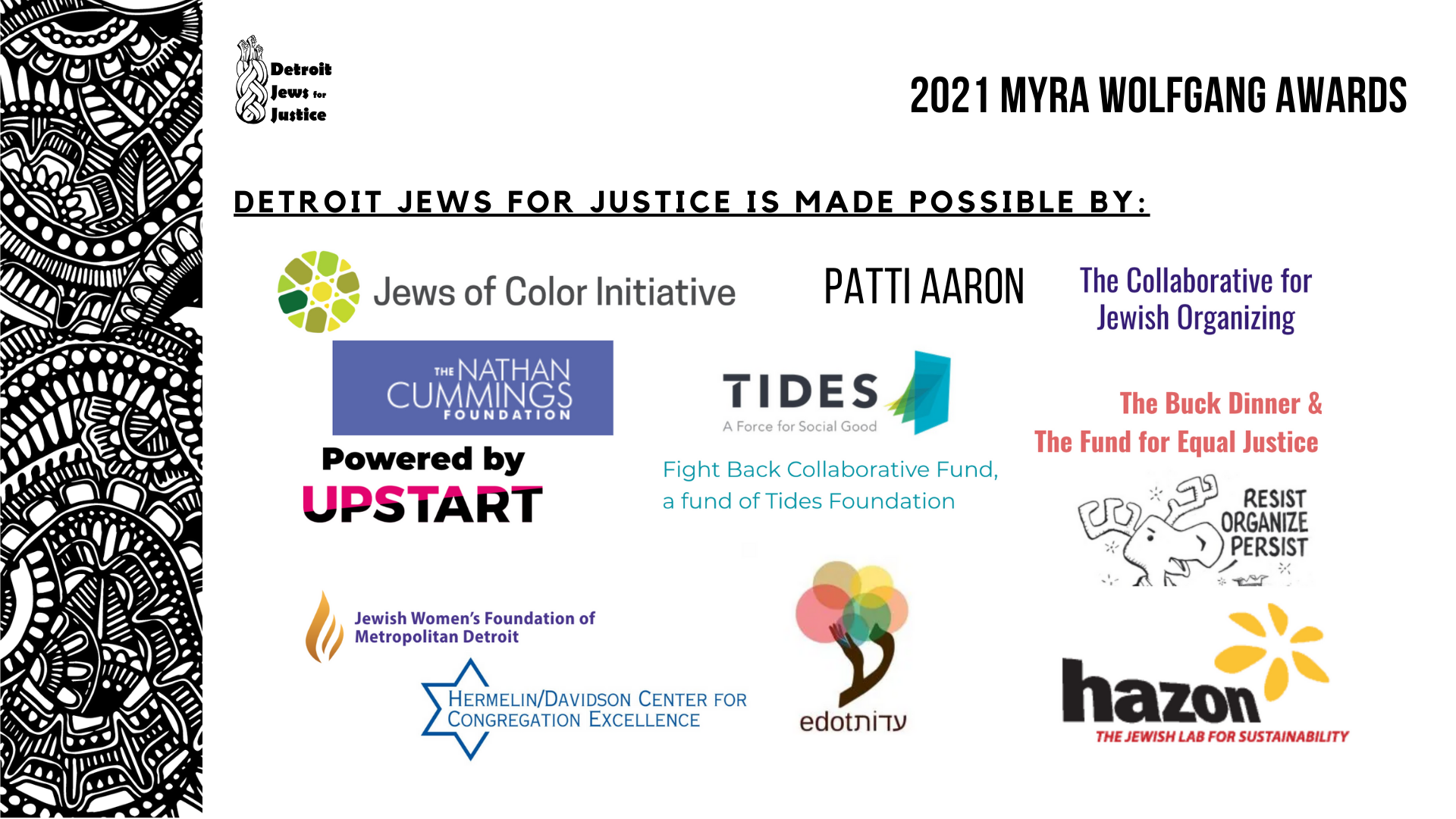 Detroit Jews for Justice is made possible by: 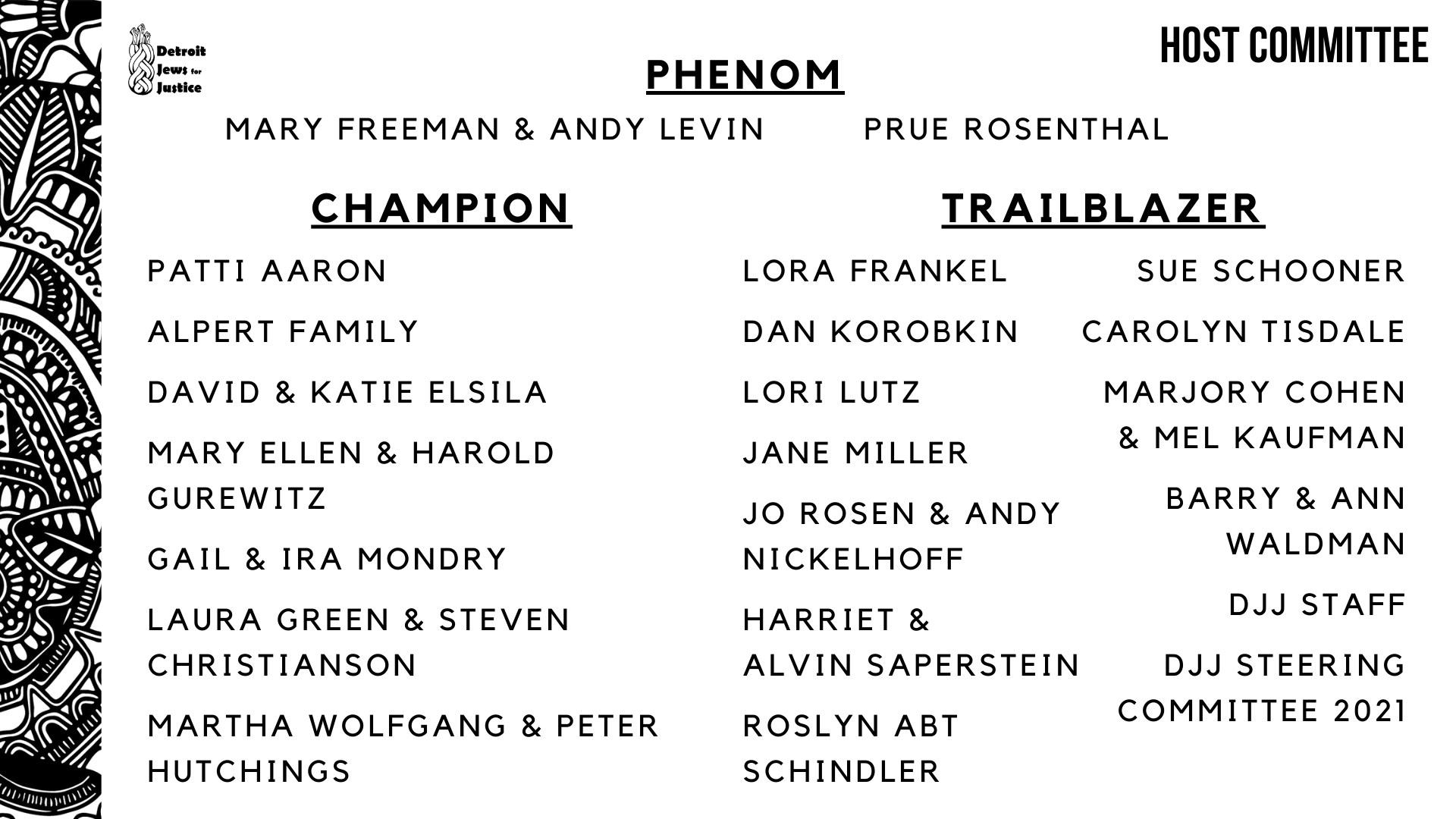 Special Thank you to:

"Primarily through black ink, I create works that are a healing and truth-seeking investigation. In conversation with the materials I am marking, I layer ink as a means of mapping the present conditions and environment through the lens of mylived experience. My interest in pattern as language stems from my multiracial heritage, which inspires how the patterns relate to one another and stand alone. Accentuating the balance of black and white, busy and still, negative and positive, and the valid in-betweens, my linework is embedded in meticulous, instinctive wisdom."

You may have seen Guterson's work "At Our Table" a reimagining of a Passover table constructed from locally sourced, discarded single-use plastics this past spring at the Museum of Contemporary Art Detroit. It's still possible to experience Guterson's collaboration with artist Laura Earle at the 22 North Gallery until April 30th called "Lumenality: Emodying Light" described as an intersection of curiosity and hope, an invitation to experience the presence of light as a source of inspiration and peace.