For the first time, I grasped on that raw, visceral level what it might mean to live among elected officials who don’t respect or protect me. Like most other Americans, I spent the first part of Wednesday asking how how how?! That afternoon, I fell into a disturbing Internet hole, where I took stock of the anti-semitism surfaced/activated/exploited by Trump’s campaign. I downloaded a gun license application, and didn’t poop for four days.

Despite the constipation, by Friday I remembered how privileged I have been and remain. It’s okay to be angry and afraid, but in this particular moment our black, brown, and Muslim members, friends and neighbors are much more vulnerable. Those of us in positions of relative privilege have got to love, support, and protect those experiencing more acute threats. In that moment I took comfort in DJJ. I don’t know what’s next, but it’s good to have this structure in place, and a growing community of smart, creative, motivated people committed to figuring it out together. 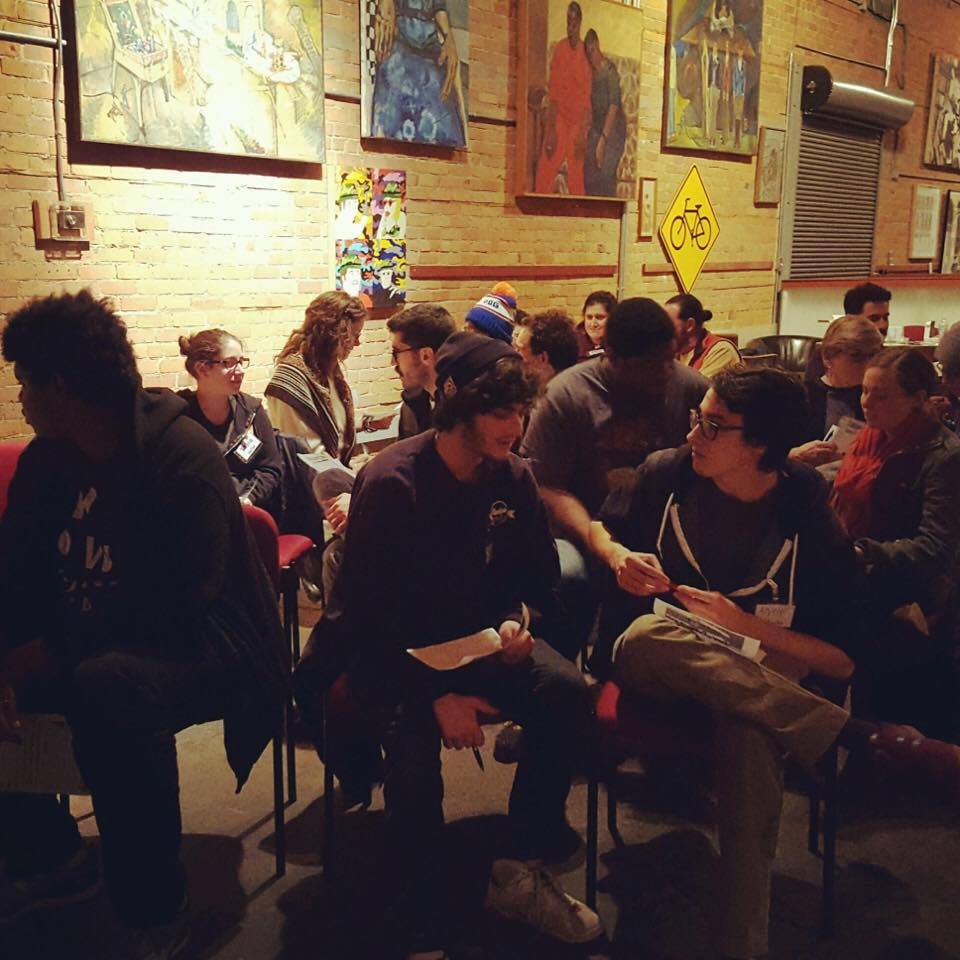 Dozens of beautiful humans turned out to the meeting at Red Door Digital on Tuesday night. We worked through a packed agenda, processing the election, sharing updates, and debriefing our campaign work. Andy and Allie prepared an exceptional snack spread. Overall, the meeting was about acknowledging the difficulty of this moment, but not allowing it to drown out recognition of all of the work DJJ has done this year, and what we have achieved along the way.

Susannah set the tone of the meeting with an ice breaker. We broke into pairs to explain what we had been thinking and feeling over the last few days. I scratched out some questions and, as the room grew noisy, moved a little closer to another leader to solicit her thoughts:

“Can the Jewish community stand firm with vulnerable others, or will it compromise?”

“Shamati.” {We weren’t supposed to respond except to register that we’d heard the other person.}

“Is this what it felt like in Germany when Hitler was elected?”

“Are we exaggerating how horrible this is?” (Mary Ellen adds now that the question of whether we were exaggerating the horror was appropriate then.  Now we know that we were not exaggerating and that it is even worse than we could have anticipated.)

What can we do to save the global climate accord?

Can women marching on D.C. have an impact?

Susannah and Alana got us giggling in their introduction to “Crappy Chanukah!” a role play game that encouraged us to reinterpret the crappy thoughts in a more hopeful way.

After reflecting on the big picture stuff, our issue liaisons brought us back to Detroit, and shared a number of bittersweet updates. Marni reported on successful efforts to register support for the upcoming water affordability bill. Sam shared some good news about Antonio Cosme and William Lucka, two local artists who faced aggressive fines and prison sentences for allegedly painting on a Highland Park water tower.

Oren and Bobby debriefed us on the Vote Yes for Transit campaign, which lost by a slim margin. This loss hurts, and you could feel it in the room. But Oren reminded everyone of how much DJJ had set out to do and accomplished. (You can read more about the campaign and what we did here.)

A number of leaders went above and beyond in this campaign, devoting tremendous energy and spearheading our efforts. Thanks Oren & Bobby, and everyone who participated!
After a difficult week, it was comforting to sit together in dismay, in solidarity, and with deepened motivation to help bend the arc of history towards justice.

In the meantime, sign all the petitions! Donate to the right organizations! Stay shocked. Stay vigilant.

Stop Trump and Save the EPA

Mikell Hyman is a doctoral student in sociology at the University of Michigan and a core leader of DJJ. Originally from New York, she now lives in Detroit.