Connecting the Dots of the Water Crisis

Sunday, August 14, 2016, researchers, water activists, community organizations, students, and community supporters from Detroit to Flint gathered in the Damon Keith Center for Civil Rights to welcome the release of We the People of Detroit’s first edition of Mapping the Water Crisis. The publication is the result of a concerted effort, led by We the People’s Community Research Collective, to document the layered and compounding health and social impacts of Emergency Management, neoliberal austerity measures, and systemic racism, as seen through the lens of the water crisis. 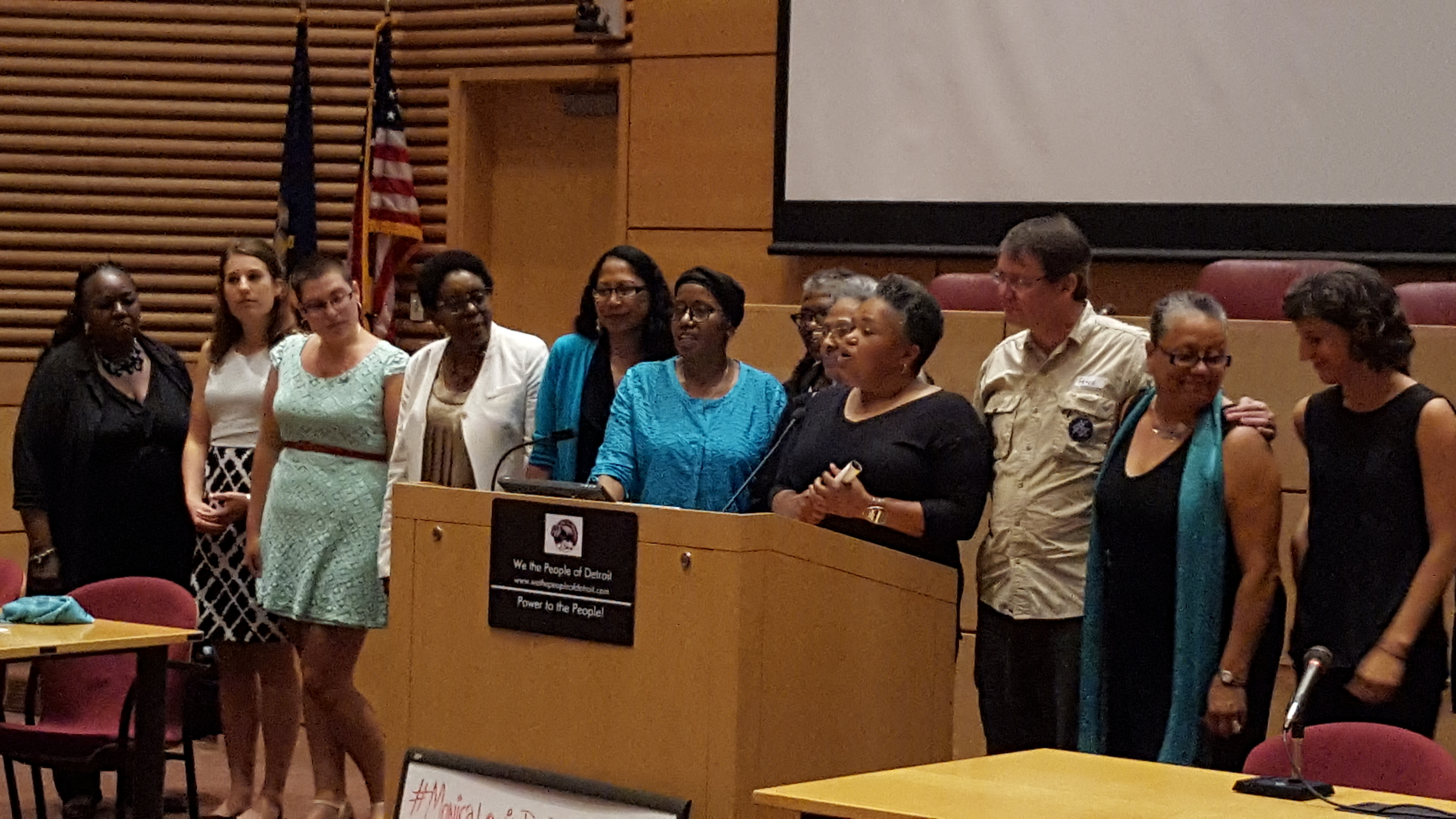 We the People of Detroit and community research partners present their findings
at the Damon Keith Center on August 14th, 2016.

The project sees the crisis itself not as singular, as it encompasses the mass shutoffs sustained in cities like Detroit and Highland Park, the connection between water shutoffs and tax foreclosures, as well as the catastrophic lead contamination of Flint’s water system. The research presents an analysis that accounts for not only the immediate impact of the water crisis, but addresses the interwoven and mutually reinforcing loci of inequity, including the water system, housing, the education system, and land use.

Though mapping and formal research are often exclusive of those for whom access to the world of academia is limited, this project was founded upon the conviction that communities not only can but must take matters into their own hands if there is to be any hope in fighting the imposition of state-sanctioned violence in its multifarious forms. One of the ways that the Community Research Collective makes this possible is through centering community members and their voices throughout the entire research process. The easily legible maps, reflecting the beauty and power in the people who created them, tell the stories of communities who have been strategically targeted by state and corporate entities which stand to profit from the removal of black families and communities from their neighborhoods. The maps tell the truth--the truth which those in power work so hard to keep concealed--that the water crisis is not the result of laziness, poverty or stupidity (as the racially coded dominant narrative would have you believe), but rather that it is a man-made crisis designed and conveyed intentionally by those in power. Most importantly, however, these maps show the power of the people, as seen in the dramatic plummets of shutoff rates mapped along a timeline of resistance!

The book released on Sunday was only the first in a multi-phasic process: this first portion focused on the collection of historic data, displayed visually in maps with titles such as “Race and Municipal Emergency Management in Michigan” and “Municipal Water Shutoff Policies and Race in Southeast Michigan” (You can see some of these graphics below and visit the following site for more: https://wethepeopleofdetroit.com/communityresearch/). The maps challenge the dominant narrative about the water crisis as they chronicle these tangible and undeniable patterns, patterns which force the recognition of the role of white supremacy in the implementation of water shutoffs in the region.

Furthermore, importantly, the maps implicitly beg the fundamental question of “why?” Once we begin to examine this data, it becomes natural to question what is happening around us, to discuss it, and together come to new realizations about our circumstances as well as our possibilities to change them through collaboration and self-determination. As one collective member so beautifully put it, the Mapping the Water Crisis is a process of “mapping our own transformation.” Not only does this research provide clear and factual evidence of targeted community displacement, it also serves as a model for cooperative work and self-determination to bring about a more just and equitable world. If the world for which we strive is to be contained within the work toward it, then this project is a prime example of such a process. If you are interested in supporting future stages of the research, please visit We the People of Detroit’s website, www.wethepeopleofdetroit.com.

Hannah Shaughnessy-Mogill is a Kalamazoo College ’15 graduate who became involved in the water struggle in Detroit during the summer of 2014 when she was working on her senior thesis, “Neoliberal Development and Resistance in Response to Crisis in Detroit.” In the last year she has been working as a Youth Services Coordinator at Alternatives For Girls. Now residing in Southwest Detroit, she has become increasingly involved in community organizing against displacement in that area and Detroit at large. She is a new DJJ'nik! 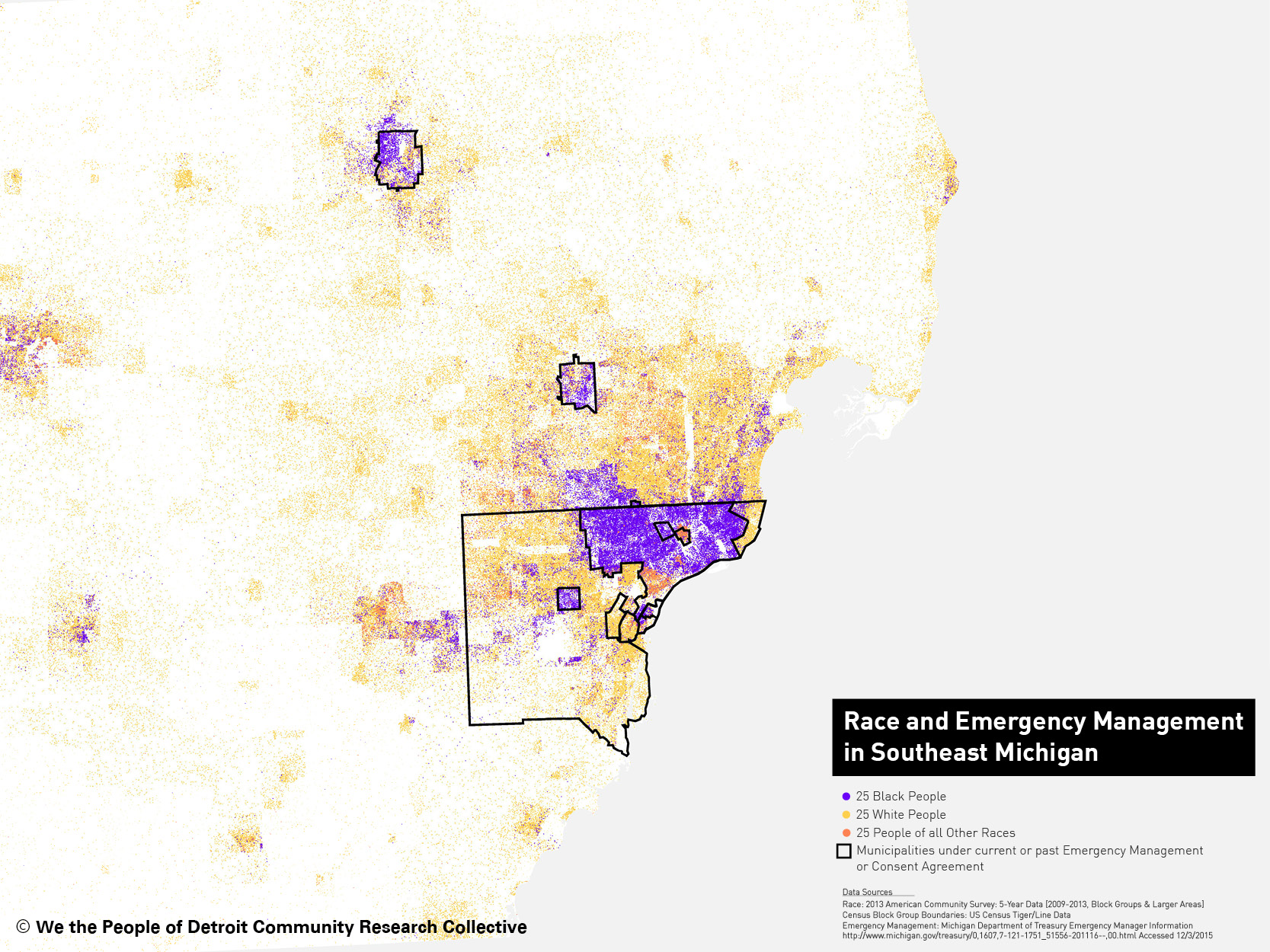 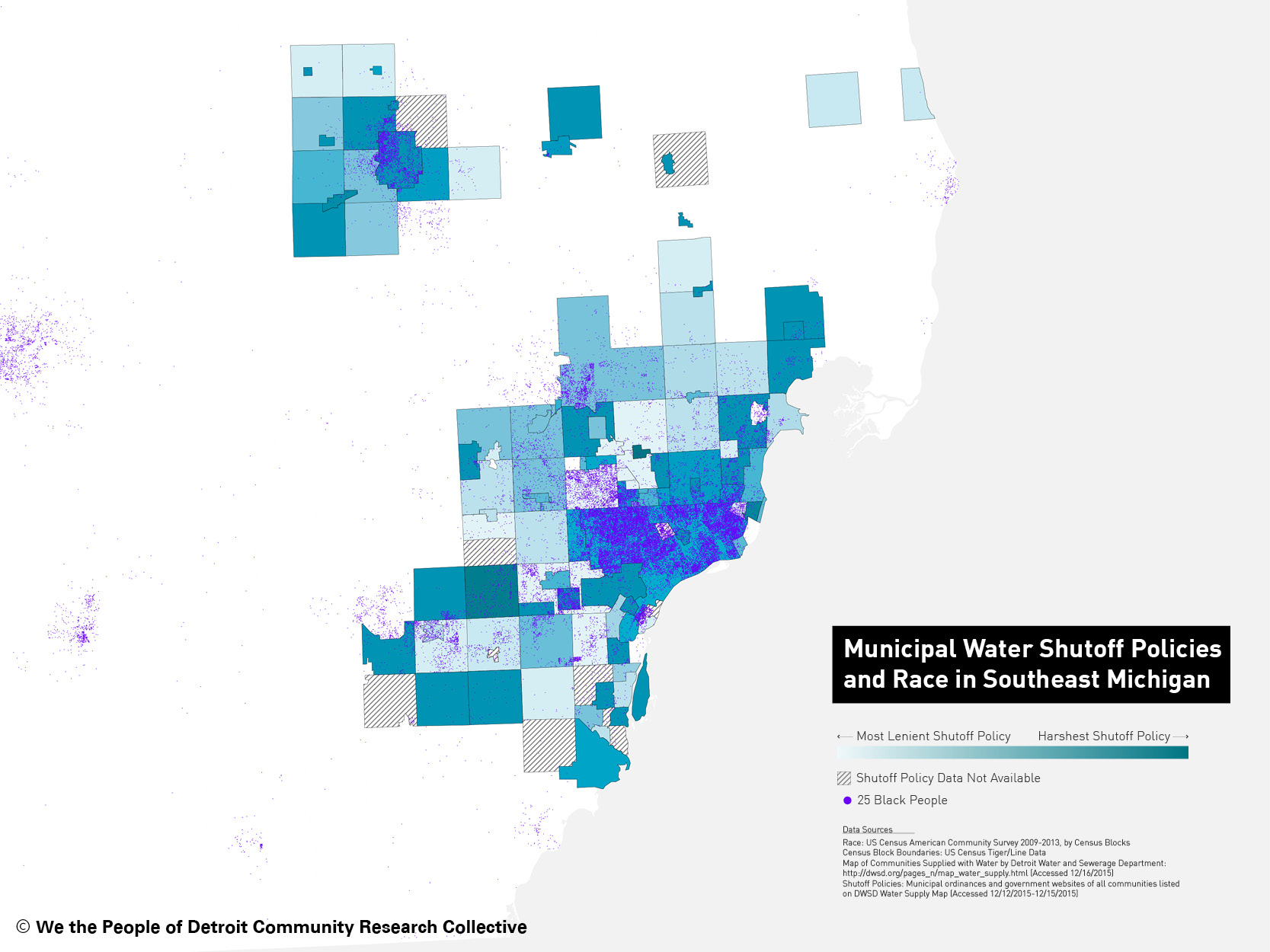 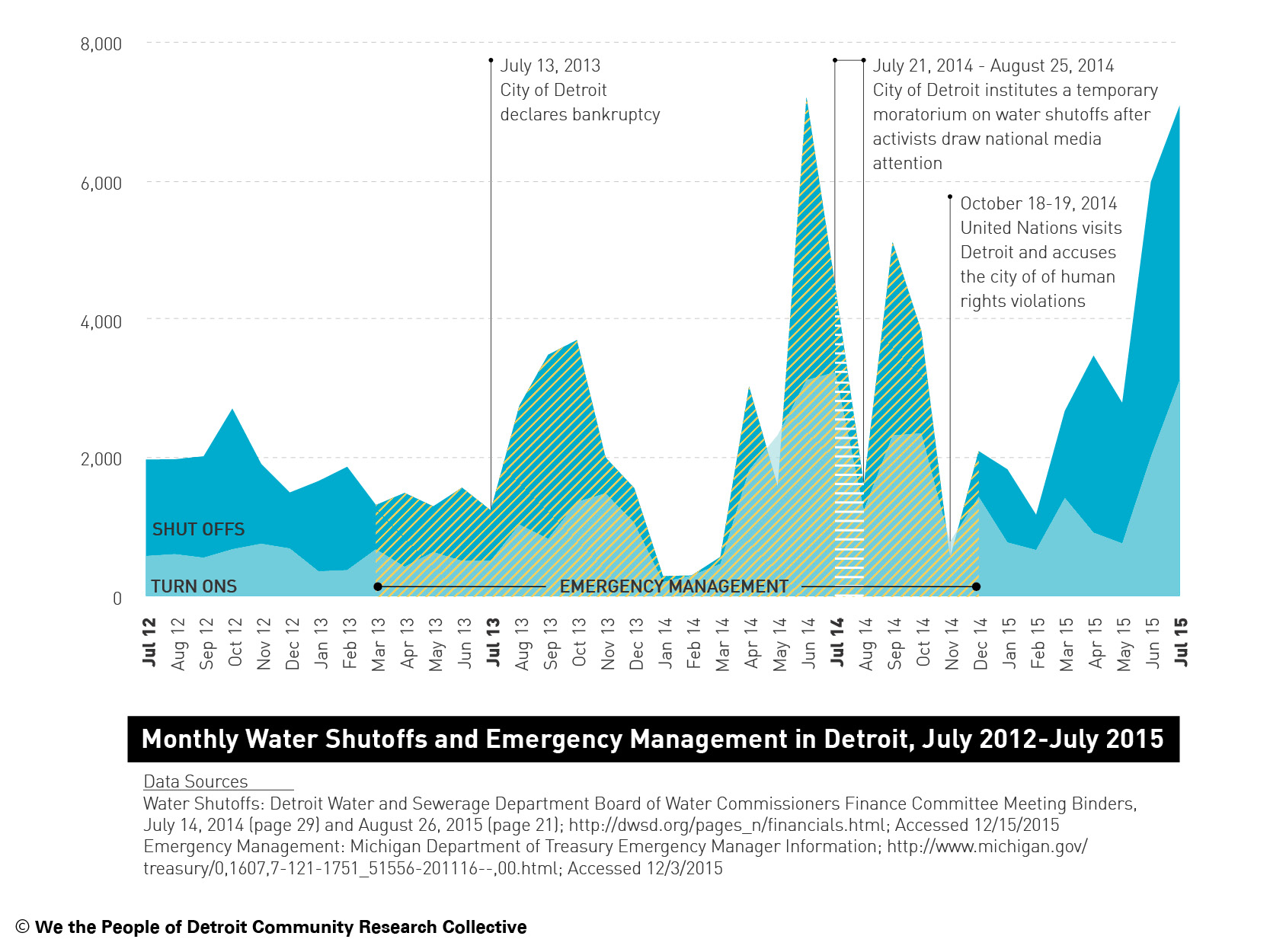 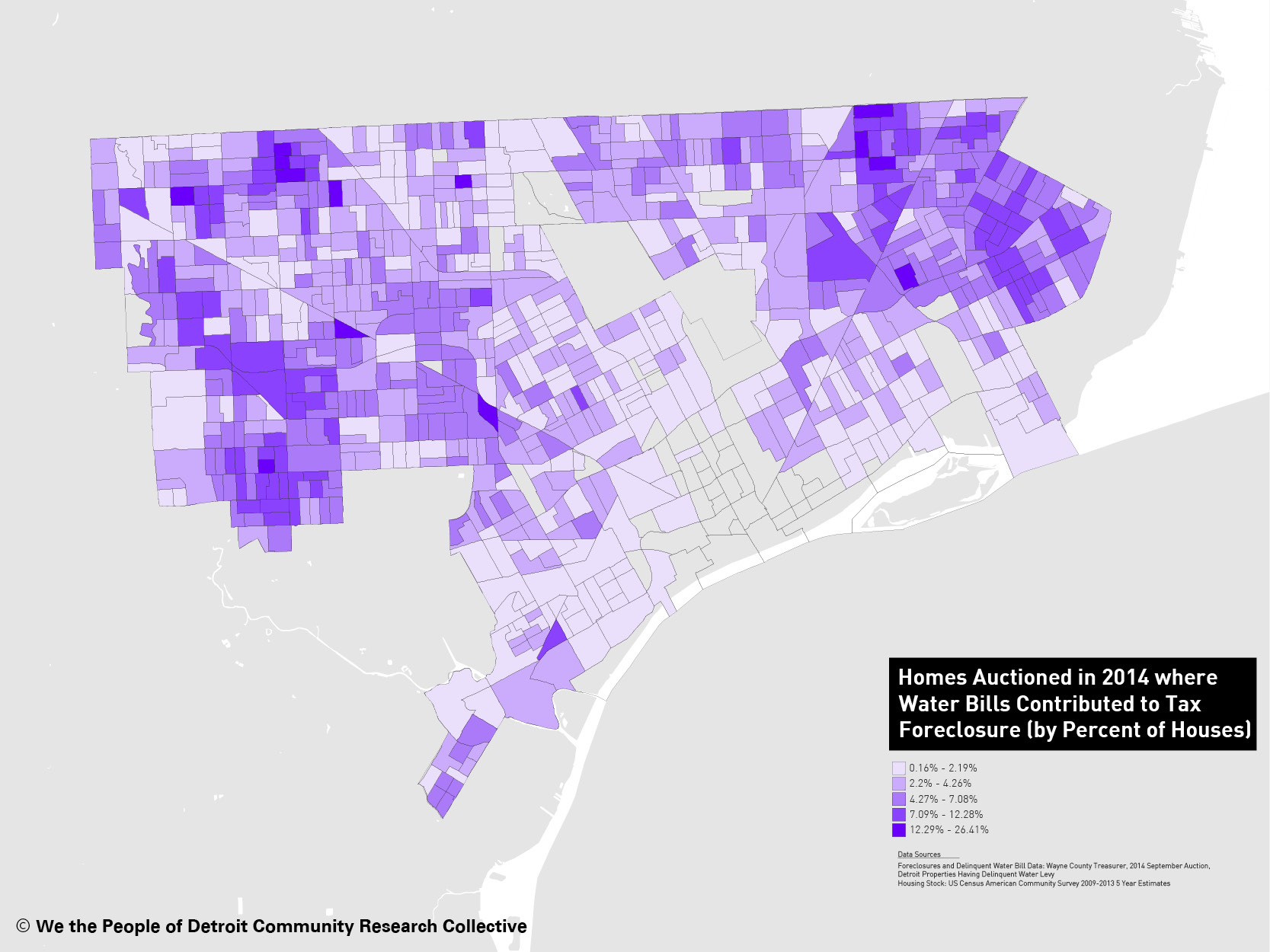