Jake on the Poor People's Campaign

For the past two Mondays, I’ve had the pleasure and privilege of joining the Poor People’s Campaign (PPC) in Lansing as part of their “40 Days of Moral Action.”

The PPC is committed to the lofty goals of ending the “four evils” (following Dr. King) of racism, militarism, poverty and environmental devastation, and recognizes that this cannot be accomplished through policy change alone. Invoking Dr. King, a national “revolution of values” is in order. These demonstrations in Lansing are not merely rallies or gatherings, but opportunities for what the PPC calls “moral fusion direct action:” principled and nonviolent use-of-self that serves to not only raise awareness for the plight of the impacted and to discomfort those in power, but to physically effect the sort of moral revival that the campaign calls for. An opportunity to pray with your feet, to invoke Rabbi Abraham Joshua Heschel’s famous statement about his participation in the 1965 Selma-Montgomery March. This past Monday morning, on the tail end of the Jewish holiday of Shavuot -- the commemoration of the Israelites’ reception of the Torah at Mt Sinai, which in ancient times was celebrated with pilgrimage to the Temple -- I certainly saw my participation in Lansing through the lens of Judaism, tapping not only my sense of spirituality, but of holy obligation to pursue justice. (“Tzedek, tzedek tirdof” - Deuteronomy 16:18) With this in mind, I wore my tallis and yarmulke -- both out of an authentic sense of prayerfulness, and a knowledge of the strategic optics of clergy and clergy-esque folks standing in protest.

Those of us who had been oriented to the Poor People’s Campaign approach to nonviolent direct action gathered in a church prior to the day’s events to sit in prayer, center ourselves, and develop relationships with one another, before joining up with a larger cadre of supporters who were busy making signs, singing rousing movement songs, and preparing themselves for the day. As we discussed our intentions and hopes for the day, a question arose about the value of risking arrest in performative protest. Reverend Bill Wylie-Kellerman, a retired pastor with a storied history of protest and direct action under his stole (including being one of the Homrich 9, who physically obstructed the private company from performing water shut-offs in Detroit) responded that recent years have been characterized by a dramatic watering-down of political activity, thanks to social media slacktivism. It’s about putting your weight into the movement, he explained, and “this” -- he lovingly chided, while pantomiming the click of a mouse -- “isn’t too much weight.” He further explained that direct action is all about the body: putting one’s body in a forbidden space, physically challenging and disrupting business-as-usual in an oppressive context. I understood this as also having an internal benefit, promoting a sense of “skin in the game” for allies whose participation is voluntary rather than imposed from without. A voice piped up from our circle and offered a teaching from the radical priest Daniel Berrigan: “Faith is not seated in the head, or in the heart. It’s about where you put your ass.” This day, we -- a mixture of young and old, clergy and laypeople, men and (mostly) women, black and white folks, seasoned activists and newly-politicized allies alike -- would be taking our faith and our asses to the Department of Health and Human Services, or, as Sylvia Orduño (of the Michigan Welfare Rights Organization) corrected, “the Department of Harm and Human Suffering.” 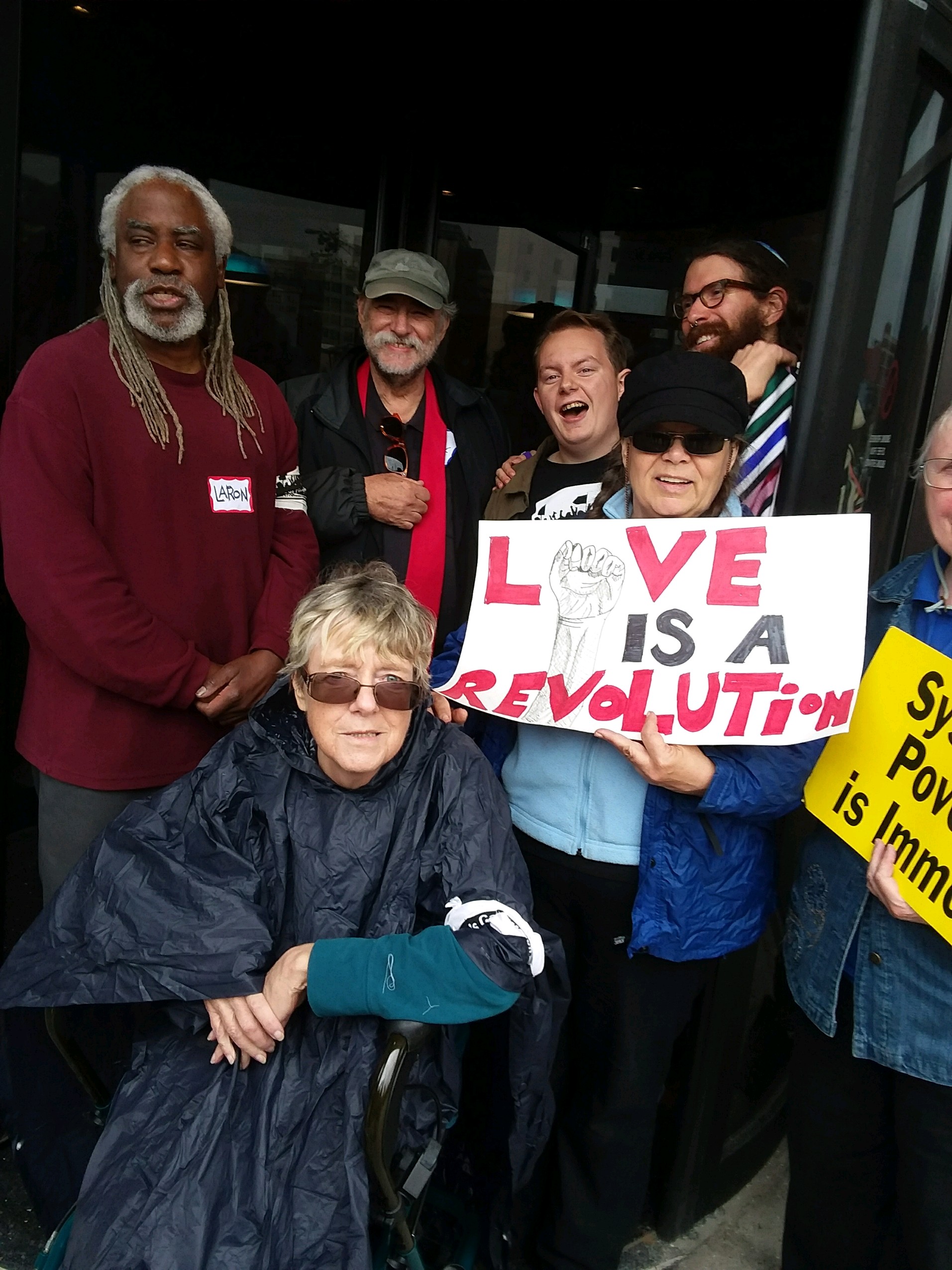 Our group mobilized and stopped briefly at the Capitol steps, where Reverends Ed Rowe and Ed Pinkney whipped up the crowd with spirited calls for resistance and justice, before rallying at a nearby park. There we heard testimony from fast-food workers from Fight for $15, formerly incarcerated / returning citizens, and undocumented community-members, all of whom spoke to the day’s theme of “Linking Systemic Racism and Poverty.” We took to the streets, marched towards the bureaucratic offices of DHHS (which were, our organizers stressed, not a portal for service-users) and took position at the entrances of the building: those performing direct action unfurled banners and positioned their bodies to block the doorways, while supporters circled in a picket line, chanting and singing in unity, “We are a new, unsettling force for liberation and we have nothing to lose but our chains.” Other protestors made their way around the building to obstruct the side and back entrances of the building. As the building’s lobby was shut-down by our efforts, police and security personnel attempted to intervene, claiming that we were violating fire codes and obstructing EMS access for someone in the building with medical need. I joined Reverend Bill and a group of others in standing in the path of a revolving door, a position that eventually allowed us to, following consensus from our group of moral actors, enter the building itself and occupy the lobby. To the shock of the building’s security personnel, sixteen of us made it into that space, and we proceeded to hold it in sustained song and prayer as building employees looked with curiosity and cops looked on with consternation. Inside, we had joined hands and circled up, each of us offering a spontaneous prayer of the heart, that we may be strengthened and blessed, that the hearts of those in power may be inclined to the plight of people. With my heart electrified by our collective energy -- and further supported by the sight of Rabbi Alana leading the crowd outside in song through the megaphone -- I drew the parallel between our encampment in and around this building, and the encampment of the Israelites around Mount Sinai as they awaited revelation. In that moment, I had the undeniable sense that, whether or not the media takes up this cause or those lawmakers heed our calls, this movement is one that will ripple and reverberate outward, far beyond the walls of DHHS. 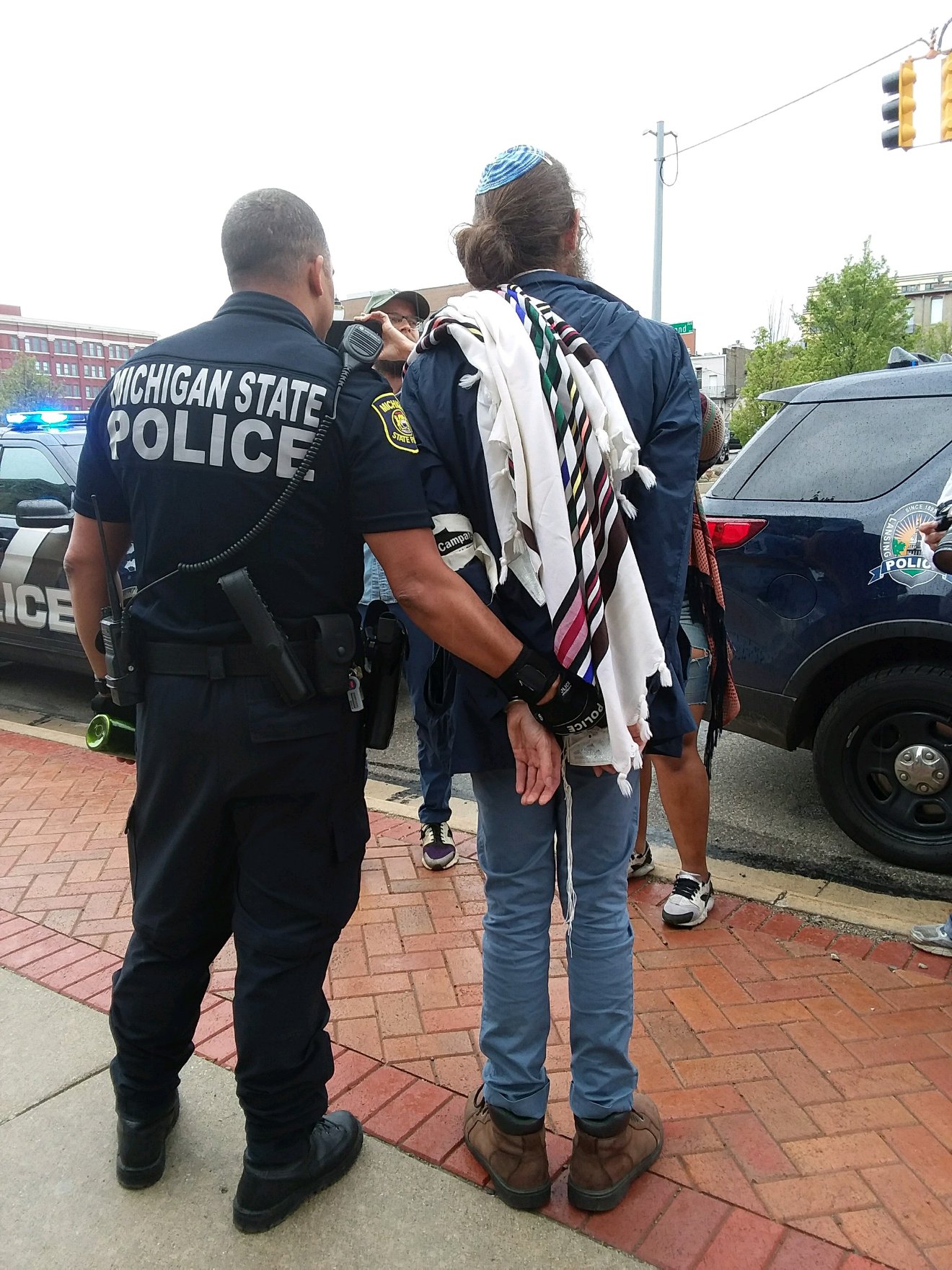 I don’t know just how long we held that space for before the police moved in, handcuffed, and arrested the 16 of us, but I do know that our collective song and spirit only grew as a result. The crowd roared in cheers and jubilation as the cops led us to their cruisers and brought us to a lock-up around the corner connected to City Hall. After being processed and booked, I found myself sitting in a cell alongside my comrades, listening to my elders tell stories about their lifetimes of showing up for what is right, their participation in formative events of Michigan protest history, and their hopes for this movement. Down the hall we could hear the women of our group doing the same (and, I believe, recruiting a non-protestor detainee to the cause!), including the distinctive voice of the eminent Marian Kramer, who’s been active in the struggle since the Civil Rights Movement. In that space -- which I was only held in for about an hour, thanks to the speedy work of the National Lawyers Guild -- I felt centered and calm, proud of the showing of communal power we had made, and optimistic for what will become of this revived Poor People’s Campaign in the long-term. From a personal standpoint, I felt humbled at this opportunity to participate on the frontlines in song and prayer with the likes of Bill Wylie-Kellerman, Reverend Ed Pinkney, and Marian Kramer. Intergenerational connection is always a rich and powerful thing, and to be among these gedolim (“greats”) of the Detroit justice scene felt like a potent initiation into what I hope will be a lifetime of days like this.

Since my first moral fusion training with the Poor People’s Campaign alongside a group of clergy, I’ve felt energized and excited by the movement’s call for holistic, multi-issue activism, and have gotten involved by showing in Lansing twice, and phonebanking to mobilize Detroit Jews for Justice members to participate in Lansing or to attend the Solidarity Saturdays and art-builds occurring locally each week in Detroit. I hope to see you out in Lansing soon - either Monday 6/5 (where a big DJJ constituent will be showing up, as the week’s theme involves WATER JUSTICE), 6/11 or 6/18 - and look forward to bringing more and more DJJ folks into this intersectional movement for collective liberation. Make sure to like the Michigan Poor People’s Campaign on Facebook, and, if you’re interested in participating in direct action: RSVP for the next upcoming training on Saturday, June 9.

Jake Ehrlich is a transplant to Southeast Michigan, a recent graduate from the University of Michigan School of Social Work, and incoming Community Engagement Associate at Congregation T'chiyah. His work in Detroit Jews for Justice involves tapping into Jewish tradition to help foster spiritual inspiration and rootedness in our organizing efforts. 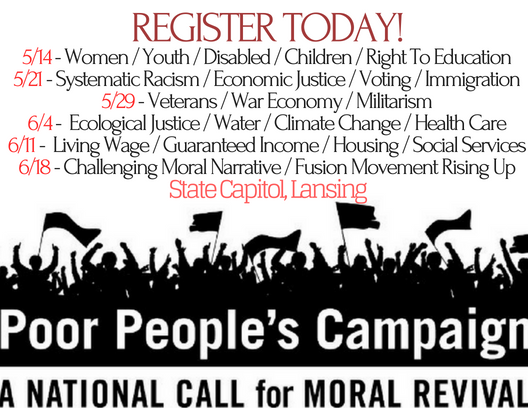