In the summer of 2010 in Montrose, PA I attended a film screening on “Gasland,” a documentary about hydro-fracking (gas drilling). At the end of the film, a farmer stood up with a jug of “water” from home, which resembled liquefied poop more than it did water. It was terrifying to learn how vulnerable our communities are.

At DJJ’s Purim Shpiel on Thursday March 31st, we retold the story of Esther to be a modern day story of water as a human right, and drew on the themes of power, sovereignty, and activism we saw in the megillah. The shpiel was called Pure Shushan, a riff on the well known Michigan ad campaign - Pure Michigan.  In essence, it sought to shed light on how our communities’ health rests on what our legislators seemingly fail to understand.  How can we live in a time when using corroded old pipes is ok? How can we live in a time when residents' water is shut off while back-tax owing corporations are allowed to keep functioning, business as usual?  How can our leaders stand by when hydro-fracking results in jugs in farmers' water supplies turning into liquefied poop? 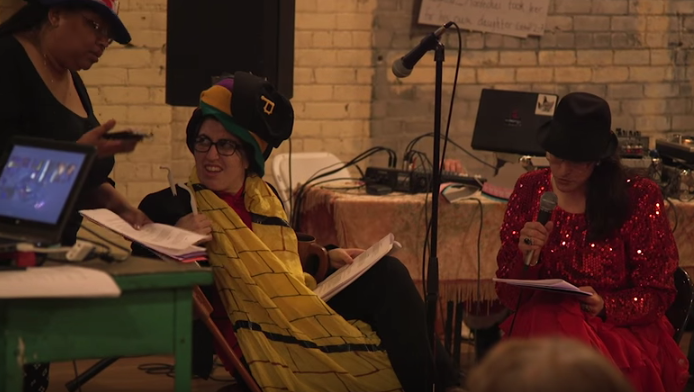 In Pure Shushan, I played the role of Governor Achashverosh, a village idiot who drunkenly stumbled his way into becoming Shushan’s “great” leader. In many respects, Governor Achashverosh embodies the persona of a domineering legislator, and never hesitates at the opportunity to be outwardly sexist, pro-establishment, and primarily concerned with his status and station. He’s the guy the audience learns to laugh at, grows to hate, and when enamored by Esther’s charming personality, proves to be relatively easy to manipulate. He makes poor, reactionary decisions, and his legislation is ruled by his fear of being unpopular more than his service of the people.

Change involves doing the challenging yet valuable work of forming strong relationships with each other, and partnering with both the people we enjoy working with, and the folks who do not necessarily appreciate or care about our mission.  So who is the greater “we”? Everyone. Including Governor Achashverosh. As Esther shows both in the megillah and in our revision, when we give leaders another perspective to reflect on and another way to act, even seemingly villainous characters can be swayed to think differently about their actions, and to change their approach to leadership.  Both the original and our version of the story are importantly skeptical about this kind of top down change, viewing it as a treatment of symptoms, not root causes.  But just as Rabbi Tarfon says in Pirkei Avot - “the work is not yours to complete, but neither is it yours to desist from”.