We heard these powerful remarks from our friend Graham Kovich of Restaurant Opportunities Center of Michigan on Economic Justice Lobby Day in Lansing on June 6. Thanks to Graham for allowing us to post -- and to ROC and all our partners at Economic Justice Alliance of Michigan for all the amazing work you do!

My name is Graham Kovich. I am a 20 year veteran of the food service industry and an organizer with the Restaurant Opportunities Centers of Michigan, also known as ROC-MI for short. In my 2 decades of experience, I’ve stood behind concession stands and bar counters; I’ve had to stand in front of fryers, bakery ovens and stove tops and I’ve had to stand in line at an underfunded urgent care clinic after grabbing a butcher knife by the blade with my bare hand because a careless supervisor dropped it in the sudsy dishwashing sink and didn't tell anyone.

The company that sent me to that rinky dink clinic is owned by a billionaire family that just received $324 million of taxpayer money to build their new stadium. They were paying me $7.40 per hour. I always wondered how an almost $800 billion industry could be proliferating such poor wages and working conditions for those of us who work so hard to make it so profitable. To understand that, we need to know what was happening a century and a half ago.

The year 1865 was a significant year for the restaurant industry- on December 18 of that year, the 13th Amendment to the United States’ Constitution was adopted, which prohibited slavery and involuntary servitude except as punishment for a crime. “But what does this have to do with the server who waits on me at Coney Island?” you might ask. Well, everything. You see, when slaves were freed from the plantations they were relegated to two industries: to the railroads to work as baggage handlers and to the homes of their former slave owners to work as servants, or “servers” as we now call them. And as if this wasn’t degrading enough, this new workforce was told that they could not earn wages from their employers, but instead would have to rely on the generosity of their clientele for wages. We call this practice “tipping” and this is how it all got started.

Nowadays servers earn more than the $0 per hour paid to newly freed slaves. 152 years later, the federal minimum wage for a tipped employee is…. $2.13 per hour and here in Michigan it’s a whopping $3.38! Now you may ask, “if this is an almost​ $800 billion industry and the people who work in this industry are at overwhelming rates of poverty, then where does all that money go?”. Well, it goes to people who work in buildings like this one behind me. The National Restaurant Association is one of the largest lobby groups in the US and they use their power and influence to keep this two tier wage system, this legacy of slavery, in place.

ROC members and allies just sat down with our elected officials and asked them to support common sense legislation around earned paid sick time and we have been working at the grassroots level to push them to introduce legislation around One Fair Wage. One Fair Wage means that there is one minimum wage for all workers, regardless of whether or not they receive tips, but it is also a wage that is a fair livable wage. The seven states who have One Fair Wage have higher rates of tipping, higher restaurant sales, higher productivity and lower rates of turnover. Not having to rely on tips as a sole source of income means that women experience lower rates of sexual harassment and people of color are less likely to experience income disparity with their white co-workers. These slavery era practices have got to go. In the 2016 elections, the state of Maine and Flagstaff, AZ voted to raise their tipped and non tipped minimum wages to One Fair Wage and we can do it here in Michigan! Visit our website at OneFairWage.com and tell YOUR elected representatives to introduce One Fair Wage here in Michigan. We can do this, we will do this and we will win with your support! Thank you. 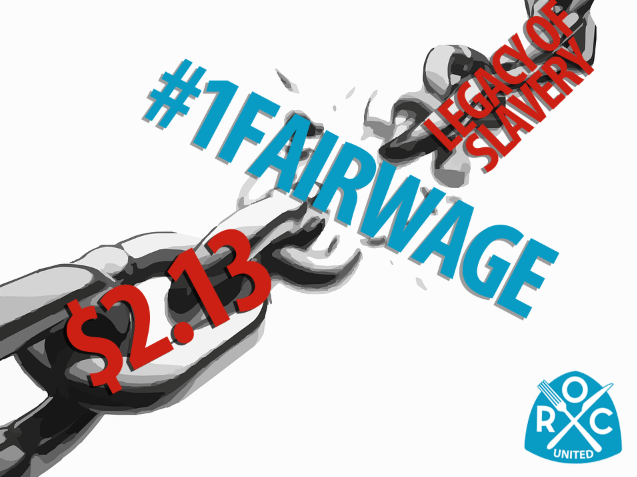