Dozens of DJJniks demonstrated at DTW against the Executive Order. Here are photos of the event.

And check out this inspiring video from our friends at Jews for Racial & Economic Justice in NYC.

I'm sorry that I can't be physically present at this powerful gathering, and I'm so grateful to be present in spirit and in word.

I'll be honest: sometimes I hate Torah. Too often it feels like I am raging against my inheritance more than I am nourished by it. This is not one of those moments - and I am so grateful. This is one of those moments that Torah gives me just what I need. Tomorrow, in synagogues around the world, Jews will read the beginning of the story of Exodus. We will chant: "Vayakom melekh chadash al Mitzrayim -- a new King arose over Egypt".... and thus begins, again, our formative story of moving from the narrow-straights of slavery to the wide plains of liberation.

“We still believe [...] what the Exodus first taught [...]: First; that wherever you live, it is probably Egypt; second; that there is a better place, [...] a promised land; and third, that the way to the land is through the wilderness. There is no way to get from here to there except by joining together and marching.”

The meeting of this moment in our mythic history and this moment in our lived history is just what I needed. Through this chance miracle I remember: we've been here before. Our comrades at Jews for Racial and Economic Justice have been saying "5777 years of Jewish resistance -- we're ready already".

I would like to take this opportunity to honor the memory of Rabbi Abraham Joshua Heschel who died this week in Jewish time 45 years ago. When he marched with Rev. King in Selma he said "i felt as if my feet were praying".

A few days after the election, I posted:

I have never been more grateful to be both clergy and a community organizer.

Movement friends: if you don't have some wellspring from which to draw, start digging! There are rituals, stories, songs that can make you stronger. There are frameworks to help you feel a part of the long arc.

Faith friends: lace up your shoes, and roll up your sleeves - it's time to pray with those feet.

I leave you with the words Rabbi Heschel wrote to President Kennedy in 1963:

"the hour calls for high moral grandeur and spiritual audacity"

Many thanks & blessings -- see you in the streets!
Add your reaction Share

Over the weekend, our community organizer Eleanor and transit leader Bobby got together to talk DJJ at Avalon International Breads. Senator Bernie Sanders happened to walk in, en route to an Affordable Care Act rally in Warren later that day (attended by thousands of advocates.)

They were psyched to meet him and share that they worked with a Jewish social justice organization. Bernie thought that was "fantastic". We hope we'll see him again down the road! Check out the link to Eleanor's FB post here. 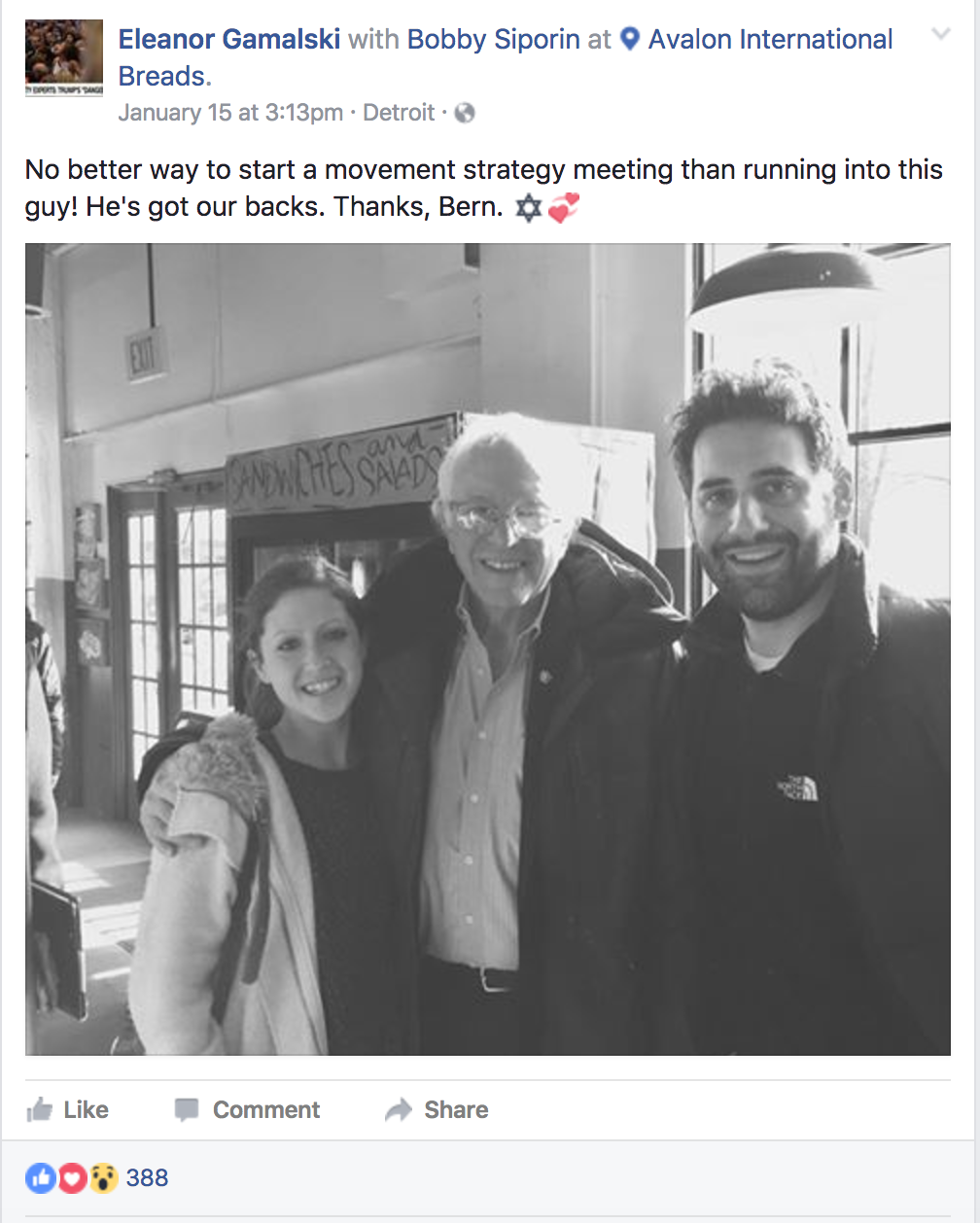 We are so excited and proud that Rabbi Alana Alpert and DJJ leaders Susannah, Hayley, Noam, Jacob, and Sam are included in the Detroit Jewish News "36 under 36"! "36 under 36" honors the young metro Detroiters who make an impact on those around them and the community at large. Yasher koach! Check out all the 36 here. 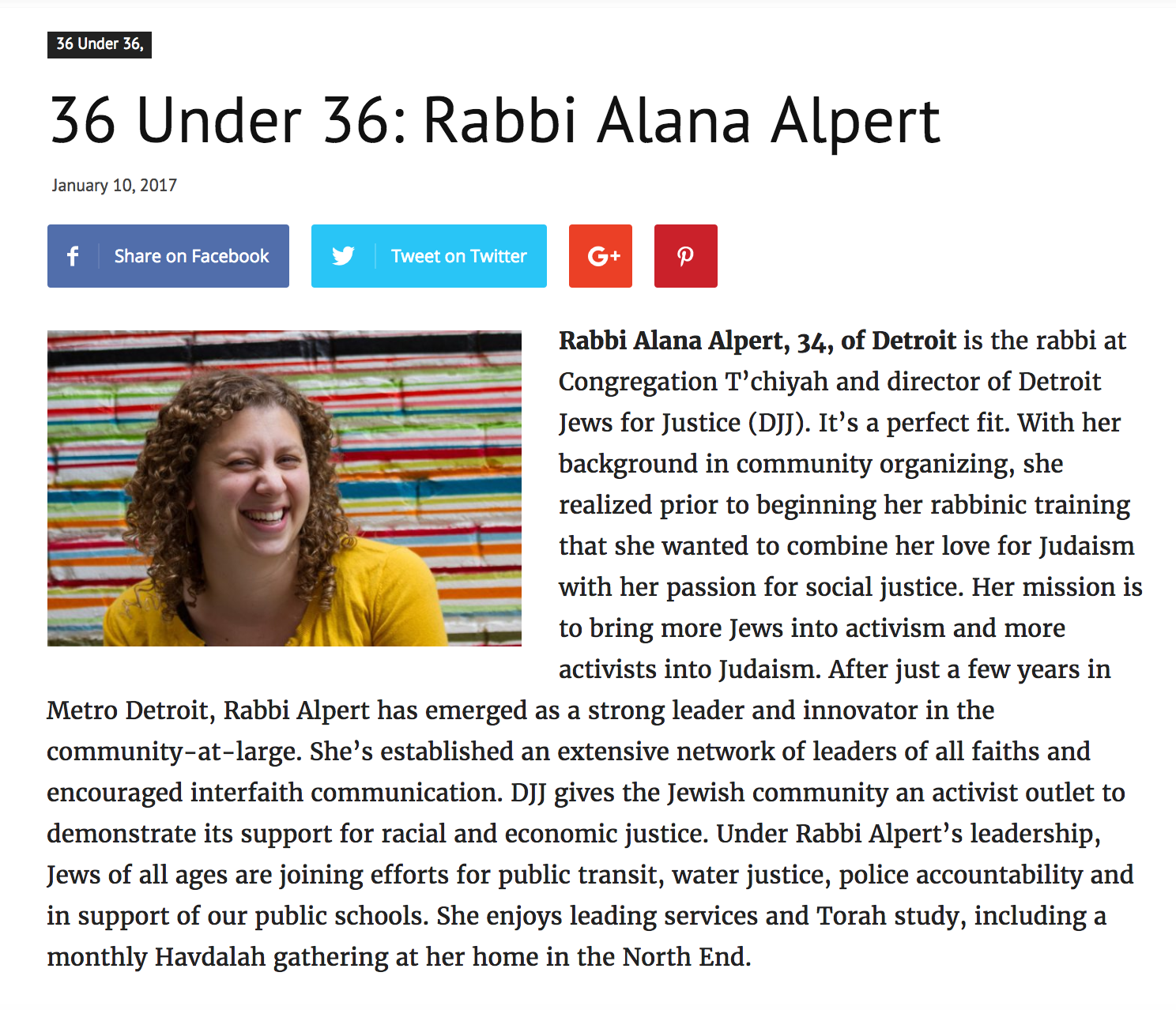 Hi, I'm Zoe Waldman, and yesterday I got to march in Detroit's 14th Annual Rally and March for Jobs, Peace, and Justice along with many others from DJJ. The truest marker of Dr. Martin Luther King Jr.'s ongoing importance is in the relevance his words of wisdom throughout today's America. This morning, Nicole Hill of Flint spoke of life without water. Joan and Joe Jacobs talked of their indigenous struggle at Standing Rock. Elena Herrada established a fight for a stronger education system in Detroit. These issues that tackle the oppressed beg for MLK's words that there is “a time when one must take a position that is neither safe, nor politic, nor popular, but he must take it because conscience tells him it is right.” As the Deep River Choir sent us out of the Central Methodist Church and into the streets of Detroit to begin our march, another MLK quote, spoken by the emcee, Abayomi Azikiwe, resonated within the room: "the time to do right is always right." And with that, we all grabbed a sign, motivated to make a difference for the maltreated within our community. 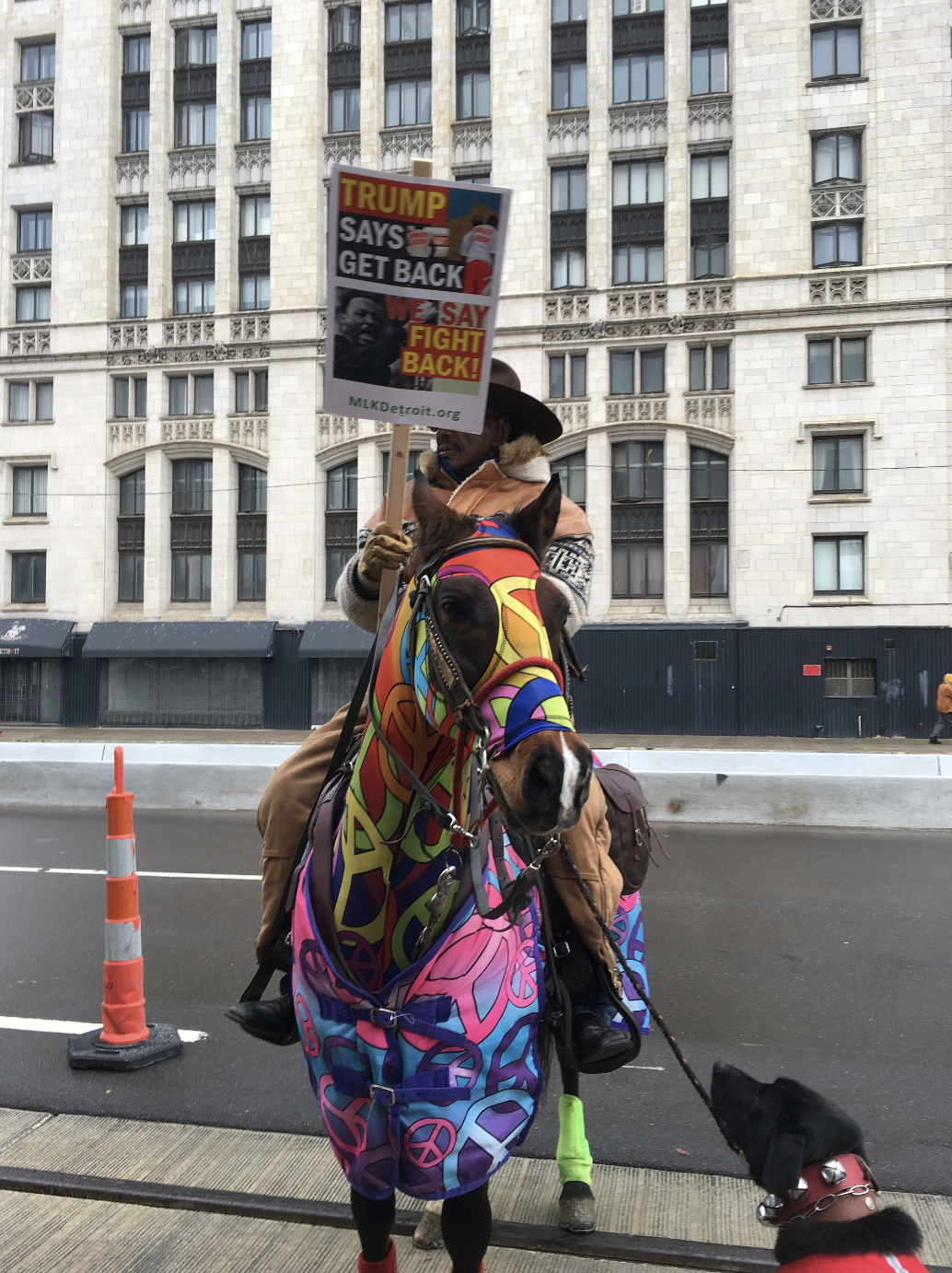 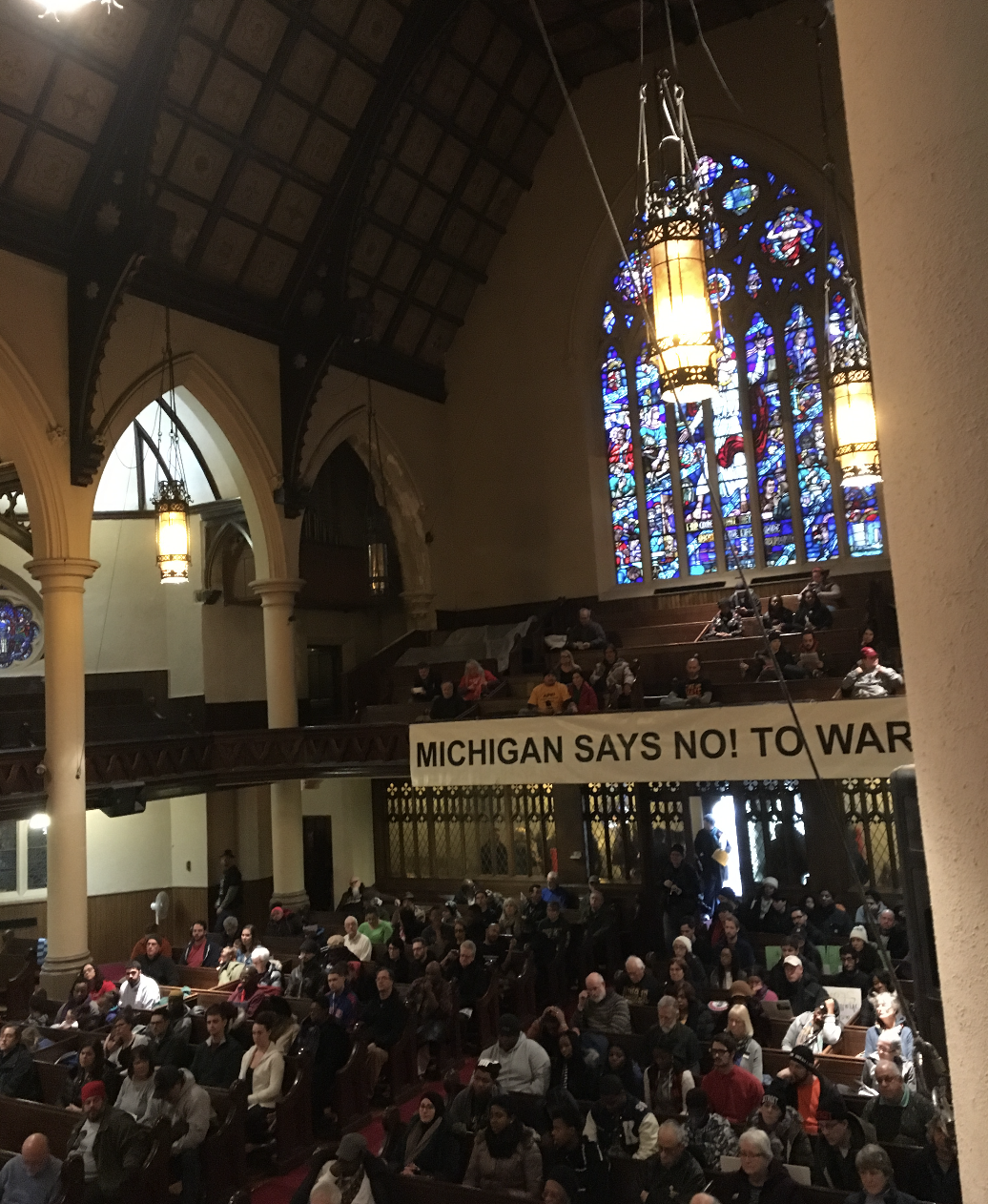 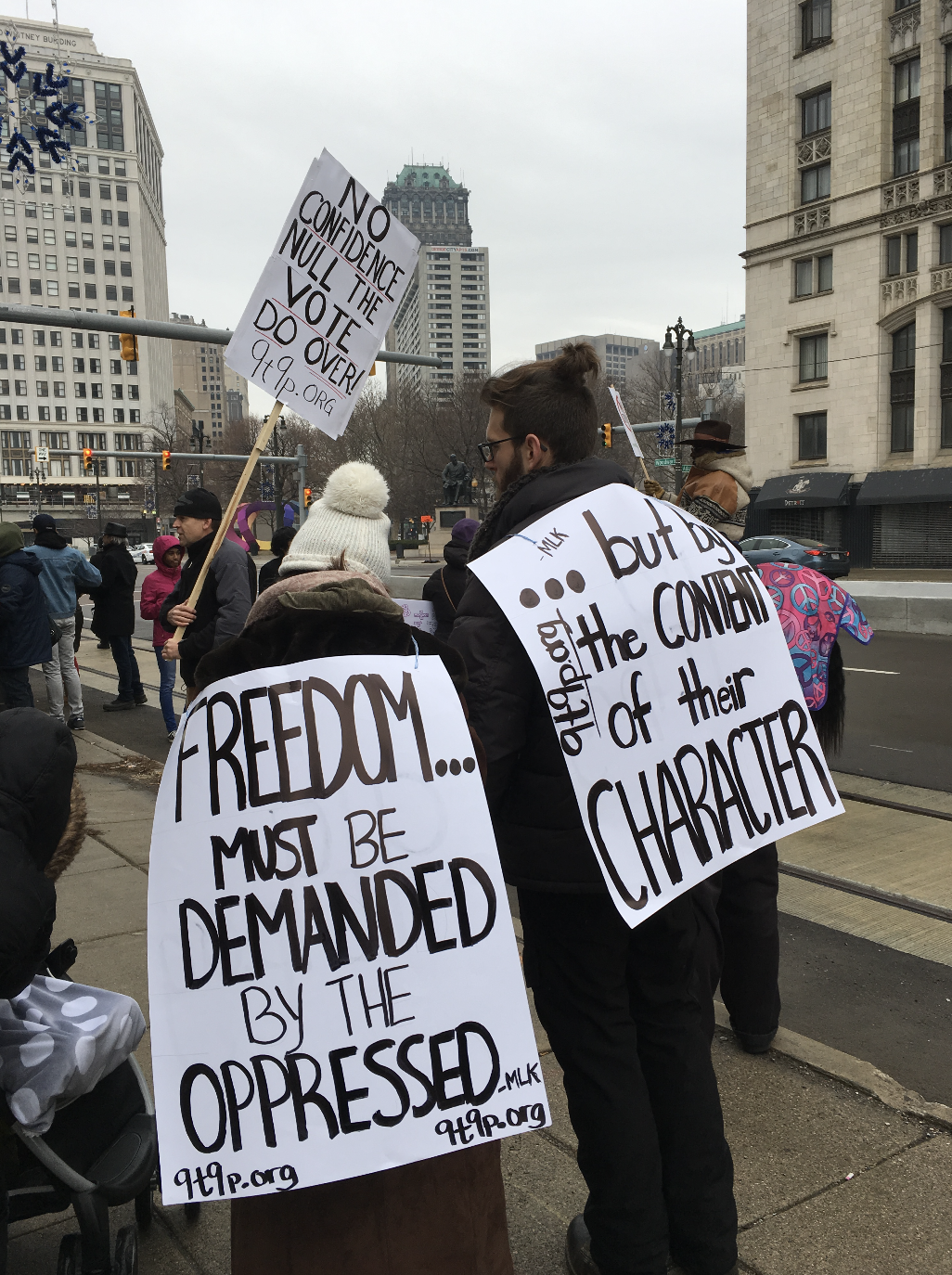 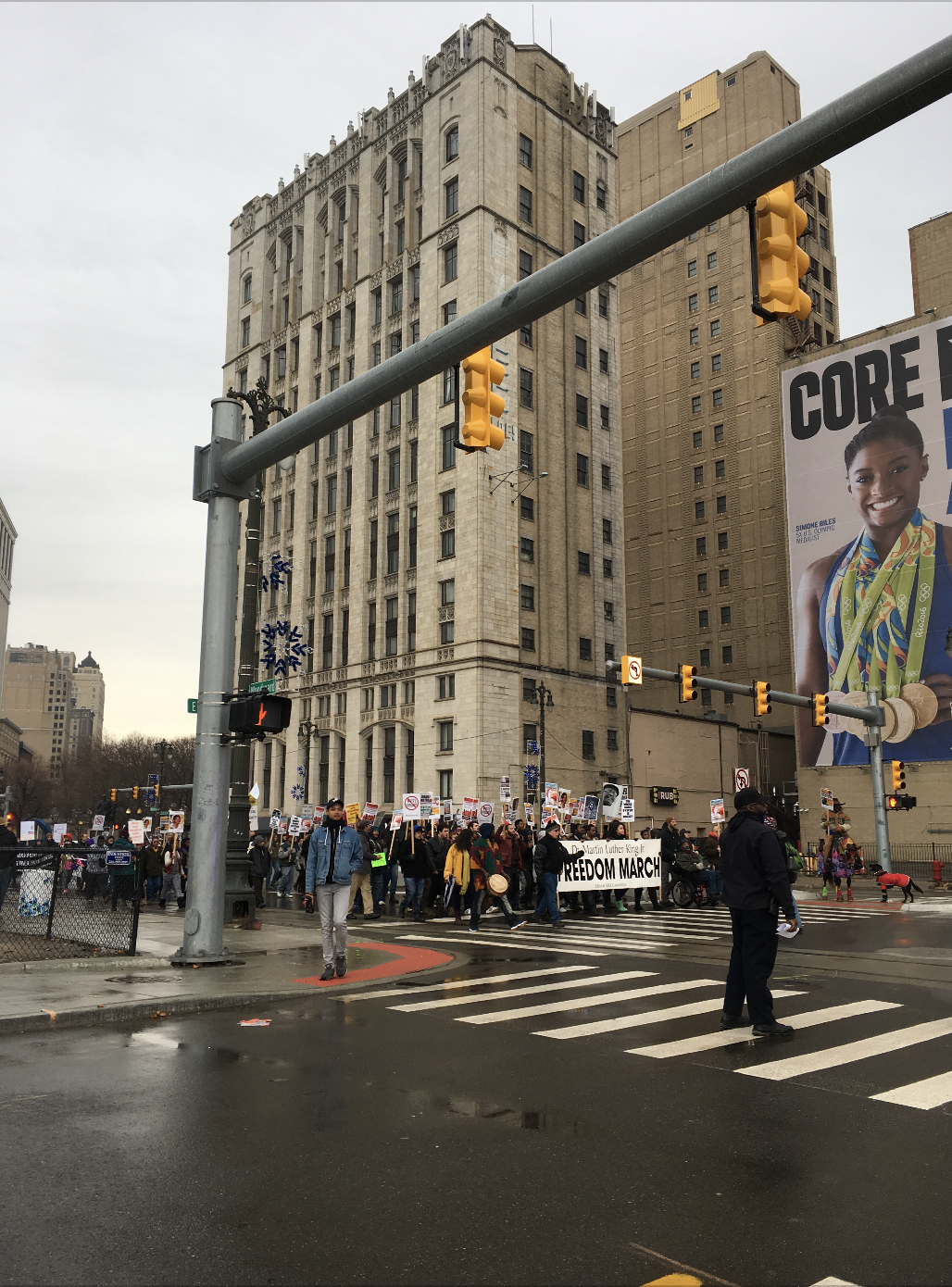 Zoe Waldman is a senior in high school in Dayton, Ohio. Zoe found out about DJJ's work in social, racial, and economic justice through her grandpa, who lives in Detroit. Zoe is excited to volunteer with the organization, and to see what she could do to help.

The picture below seems like the best way to close out this year.

The image of a protest sign freshly painted by one of our young leaders symbolizes the work of fighting for justice. It is an image for Hanukkah, a holiday that challenges us to think seriously about resistance to oppressive powers. To me this picture represents the messy behind the scenes effort that allow us to raise a collective voice.

Shabbat is coming quickly. Literally or metaphorically, we put down our signs, our paint brushes, our credit cards. For one day, we imagine the world is perfect: that it needs nothing from us but to witness. However many people we mobilized, we mobilized. Whatever money we raised, we raised. However many victories we won, we won.

We are so proud of the work we and our partners have done this year. And we are grateful to so many of you for making it possible with your time, energy and dollars. There are a still a few hours left -- just over $5000 will help us win the full generous match being offered. Thank you again to everyone who has helped us get this far and to those who will throw in these last hours.

Of course, the Gregorian New Year is also upon us. Like the Jewish New Year, this threshold is an opportunity to reflect on the year past and set intentions for the one to come. We at Detroit Jews for Justice commit ourselves to ramping up our efforts to get our community on the right side of struggles for justice in Detroit, Michigan, and the United States. 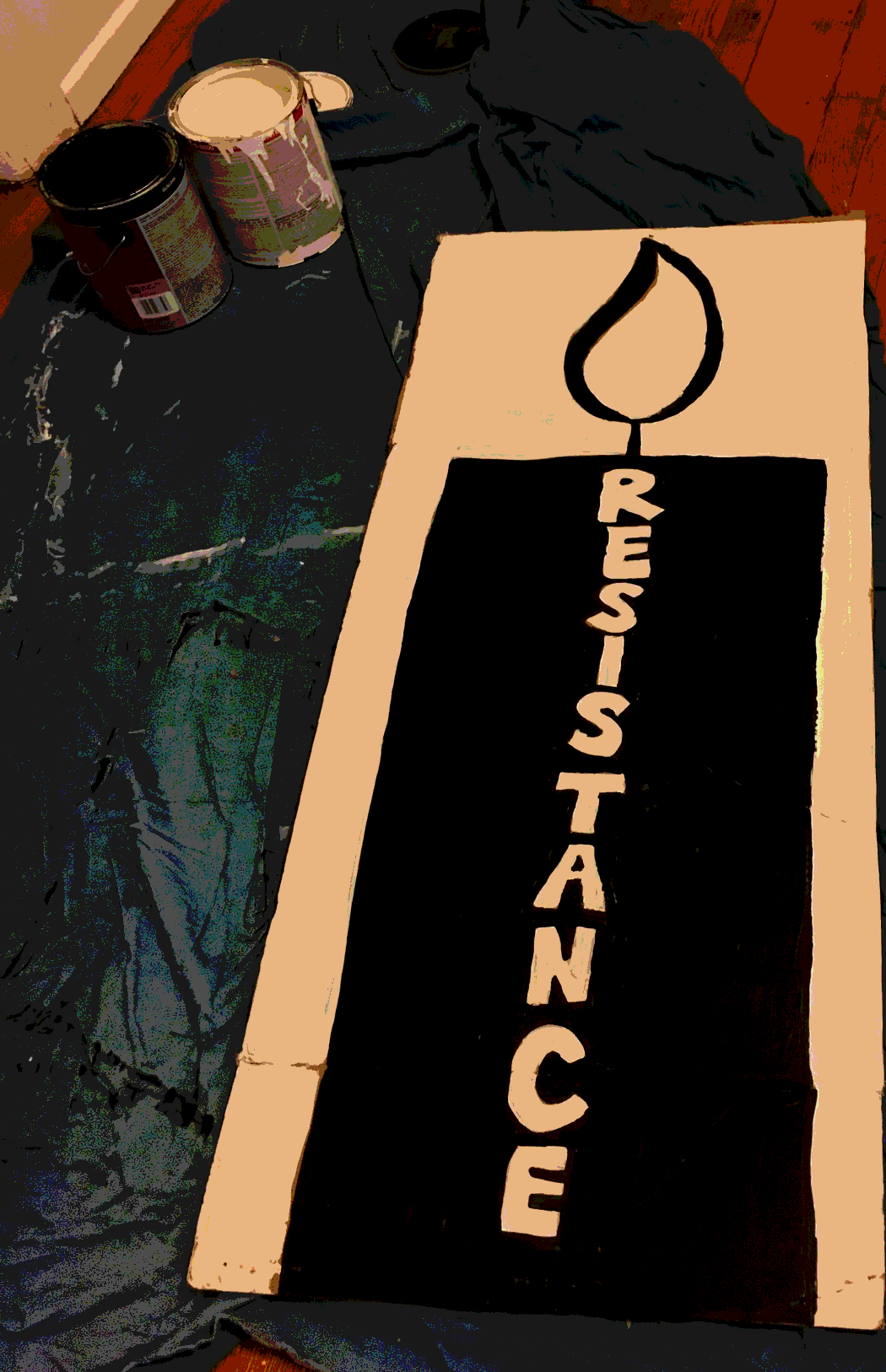 [...] this year I want to call
myself to task for what
I have done and not done
for peace. How much have
I dared in opposition?
How much have I put
on the line for freedom?
For mine and others?
As these freedoms are pared,
sliced and diced, where
have I spoken out? Who
have I tried to move? [...]
Here I stand before the gates
opening, the fire dazzling
my eyes, and as I approach
what judges me, I judge
myself. Give me weapons
of minute destruction. Let
my words turn into sparks.

(from The Birthday of the World)

Rabbi Alana Alpert
& all of us at Detroit Jews for justice


p.s. to learn more about what we've done this year, check out the "What We've Been Up To" page on our website.

I write to you just a few hours after our second annual Festival of Rights. Jews and our allies came together to celebrate our hard work, assert our shared vision, and affirm our commitment to realizing that vision. A few brief highlights: 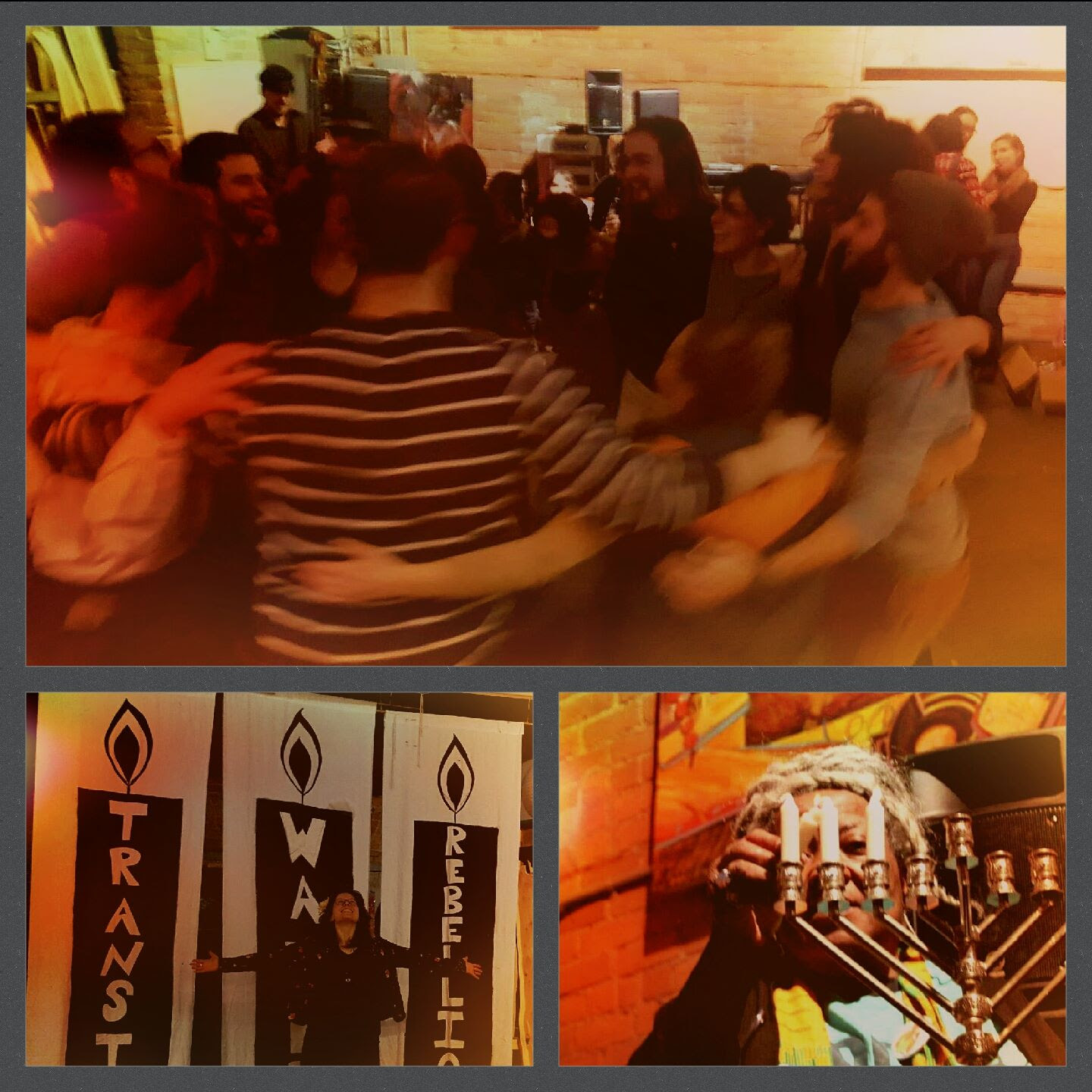 Some of our most trusted partners lit the menorah. What an incredible privilege to offer the honor to friends whose leadership we have been blessed to follow this year. We were joined by friends from The Motor City Freedom Riders, The Ecology Center, and the People’s Water Board.

Hanukkah means “dedication” - it gives us an opportunity each year to rededicate ourselves to struggles for justice. Tonight, new and old leaders committed ourselves to stretching ourselves in the coming year -- to showing up for learning, for action, for play, and for the nitty-gritty.

TURN UP THE FLAME

After our menorah was lit, an anonymous donor let me know that she was so inspired by the evening that she was offering to match all new gifts to Detroit Jews for Justice that come in by the end of the year (12/31) on a 1:2 basis up to $5000. MIRACULOUSLY, $2000 in additional donations will become $3000!  $4,000 will become $6000! AND $10,000 in new gifts between now and 12/31 will turn into $15,000 for DJJ!  So if you have not yet made a gift this year to DJJ, PLEASE consider making one before the end of the year.  If you have already made a gift to DJJ this year, thank you! Please consider getting an early start on next year's giving and make a donation today.

Watching a slideshow of our short history I felt amazed by how much we have been able to accomplish so far. The plans our leaders are developing for this coming year are ambitious. We ask for your voices, hearts, hands, and feet -- your money and your time. It is only with all of those things can Jews in Metro Detroit join the fight for racial and economic justice.

As we sang together:
Kol echad who or katan, v’kulanu or eitan -- Each of us is a small light, all of us are a great light.

Thank you Zak Rosen for helping put together this great review!