A Look Back at the Direct Action Summer Series

Over the course of the summer months, the Freedom and Thriving Team leaders banded together to create an incredible learning series arc, called the Direct Action Summer series. This series was aimed at bringing together members of the DJJ community to learn about collective action, showing up in activism spaces as a Jew, nurturing discomfort with direct actions, and empowering ourselves to participate in direct actions while representing DJJ.

In the first Direct Action Summer meeting on 6/9/21, titled Protest and Civil Disobedience, the Freedom Team chairs (Devin and Eleanor) and Thriving Team chairs (Kira and Reva) created an informative presentation where they presented content about the use of direct action in movements for social change, including Detroit. They broke down effective non-violent forms of direct actions, including civil disobedience, strikes/boycotts, and peaceful marches/demonstrations. The presentation also included a portion where attendees heard from Allison Laskey from Detroit Will Breathe about her experiences doing organizing work as a Jew. Lastly, the leaders discussed how to be in solidarity with activism taking place in Detroit and Metro Detroit, how to stay safe at marches or demonstrations, and provided the attendees of the meeting with upcoming DJJ or affiliated actionable events. You can check out the PowerPoint slides here a recording of the meeting here!

At the second Direct Action Summer meeting on 7/7/21, titled Showing up Authentically and Effectively, the leaders changed up the content of the meeting to be more discussion based and less presentation based. They spent most of the meeting talking about how members of DJJ, both as individuals and as a collective, show up for direct actions in their spheres - and how they so authentically and effectively. Attendees of the meeting were split into breakout rooms where they were able to discuss what kinds of things both push them to participate in direct actions, but also might be holding them back from participation. Folks were able to speak openly about what kinds of reservations they have about participating and what kinds of things would make them feel more comfortable in direct action spaces. The leaders chose to only record the parts of the meeting that did not include discussions, so this is the reason why the recording is only 12 minutes - check it out here!

Lastly, at the final Direct Action Summer meeting on 8/4/21, titled Raising Each Other Up, the leaders broke the participants into groups for longer discussions where they discussed some of the biggest challenges and dynamics that they heard from attendees of the previous meetings. These items included: burnout, navigating coalition work and power dynamics, and strategies for DJJ turnout. They were able to engage in an amazing affirmations circle, where they lifted each other up for continued direct actions in the months to come. This meeting was not recorded at all, as it was entirely discussion based - but you can check out the slides here. Below you can find a screenshot of the virtual affirmations circle! 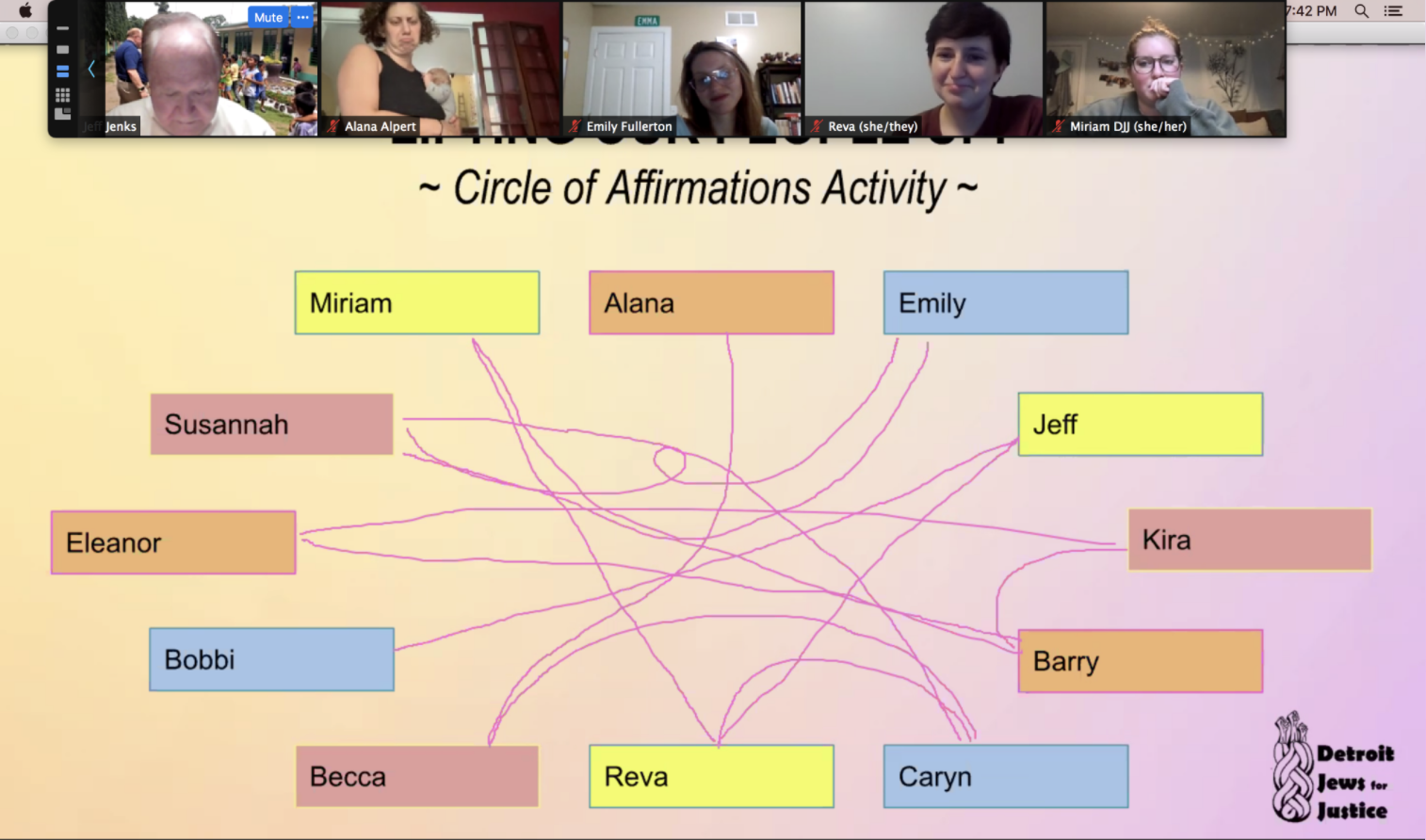 The leaders had such an amazing experience planning and running these three meetings with the DJJ community. They hope folks had impactful and meaningful takeaways, and left the learning series feeling more comfortable and confident participating in direct actions going forward!